The Battle of the Somme had three phases. The first, being the initial assault on German positions (1-14 July) and the appalling slaughter that ensued for an advance of no more than a mile or so.

The second consisted of mopping up operations and small scale attacks, extending over a period of two months. This gave the British 'High Command' time to comb their hair back down and try to think up another great idea for the next board game.

Meanwhile back in England other rumbelings were to be heard. It came from a machine that was about to change the face of warfare forever. The new secret weapon was an ironclad armed caterpillar that was meant to destroy and sail over enemy trenches, enabling follow on troops to exploit the breakthrough. "His Majesty's Landships", or Tanks as they became known, were still going through trials as were their crews.

This brings us to phase three. Ready or not the 'generals' needed a face-saver, as back in 'blighty' they were ( here a classic English understatement) ... not too popular.

The area between Combles and Theipval seemed 'jolly good' and it was here that the first step in the evolution of armoured warfare was made, knuckle-dragging their way to the front at around 3mph.

Some were termed Male - armed with two R.N. 6 pdr QF gun and three Hotchkiss mg's. Others were Female with one Hotchkiss and four Vickers .303 mg's.

The first tank battle was near the village of Flers and although they caused extensive damage and gave the enemy a terrible fright, their success was only local. 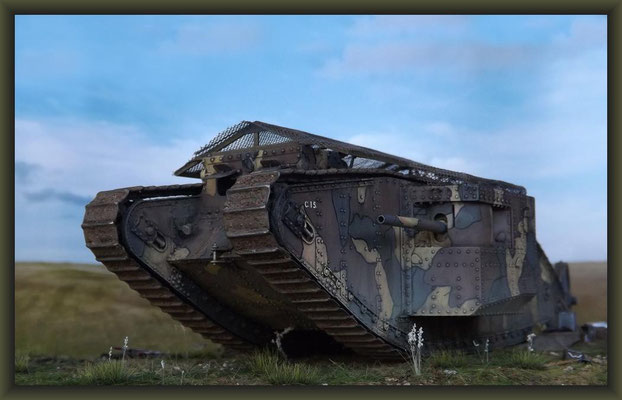 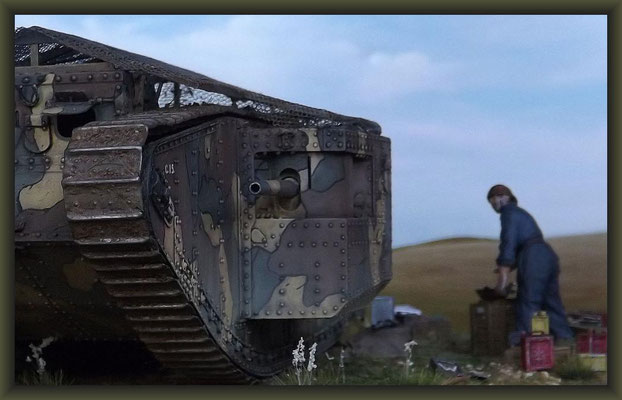 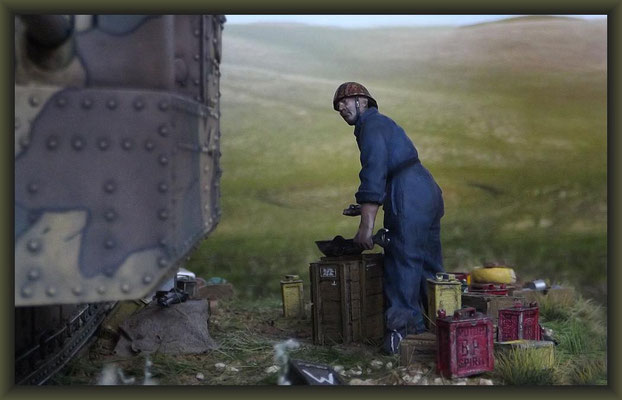 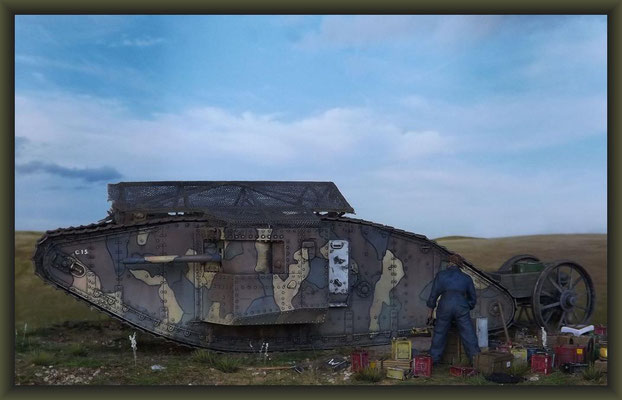 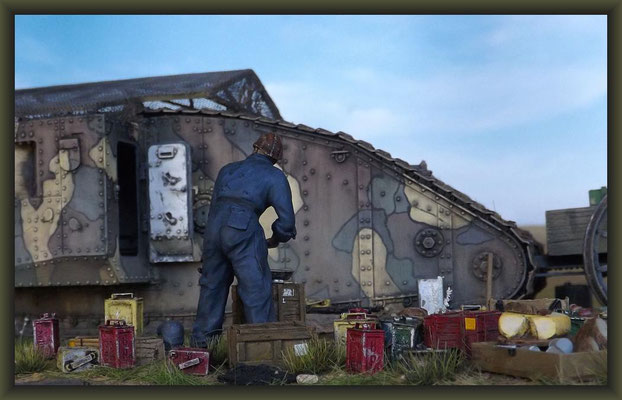 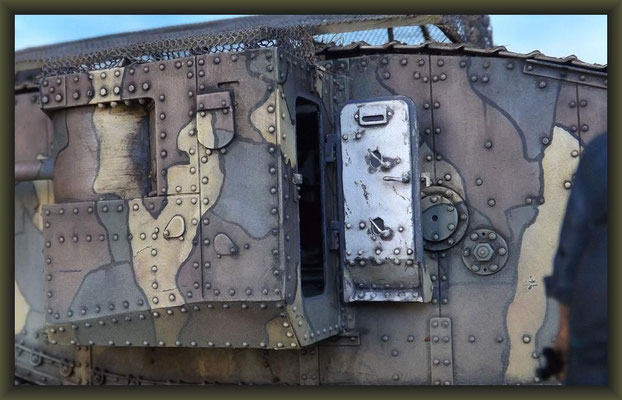 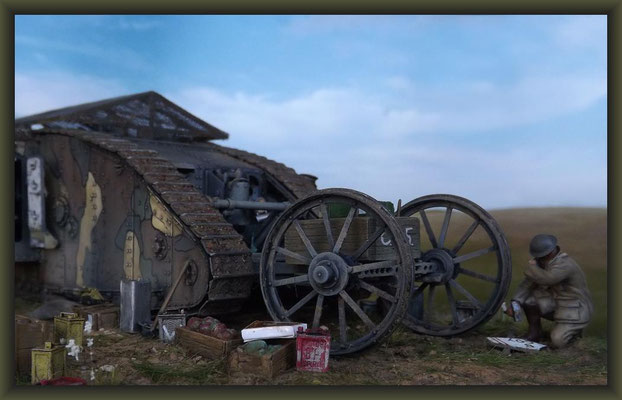 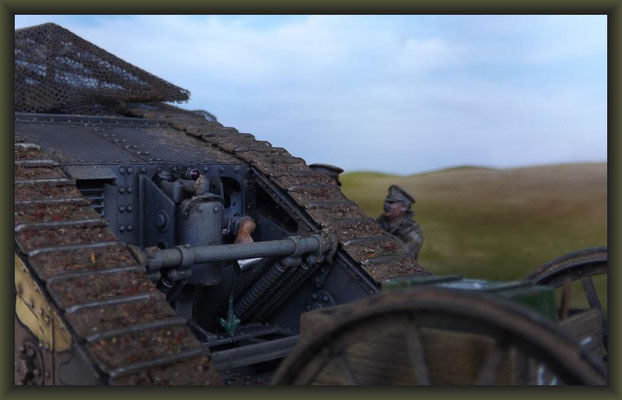 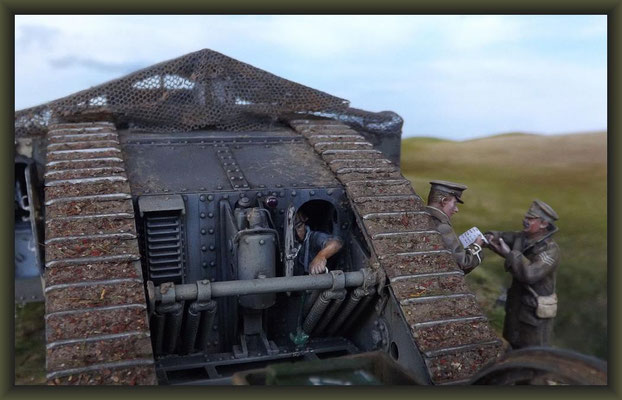 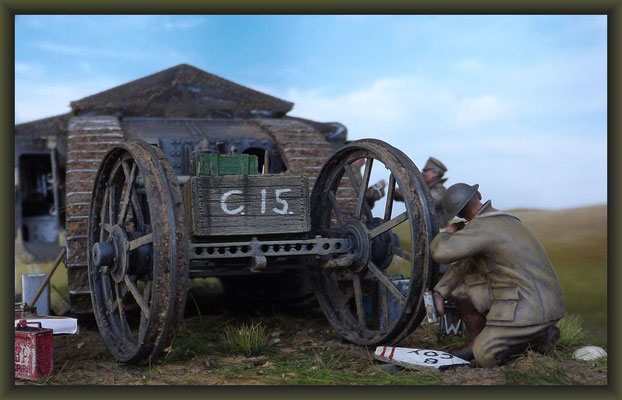 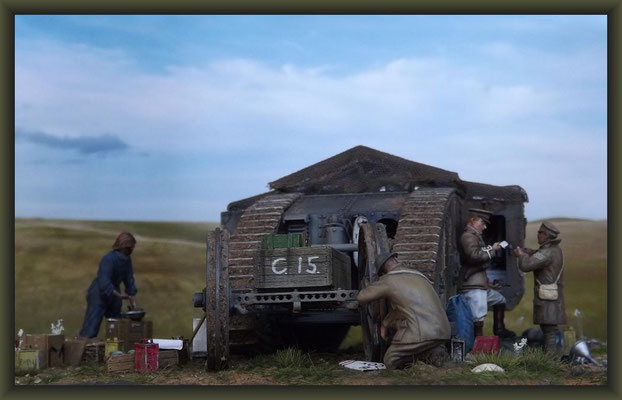 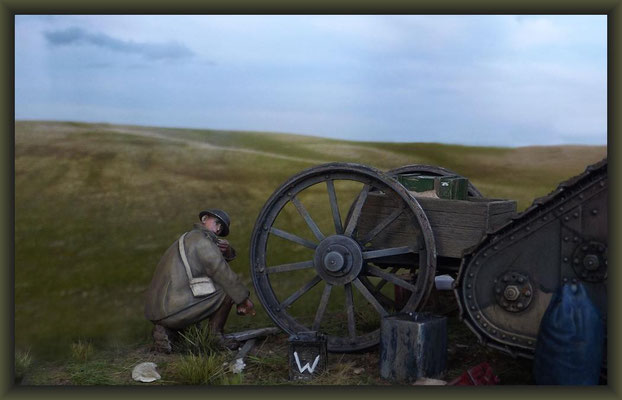 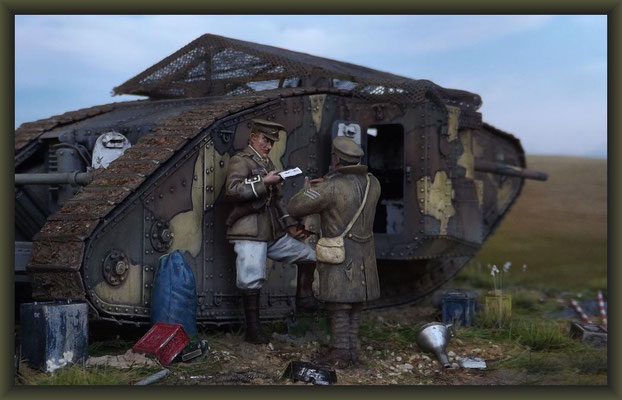 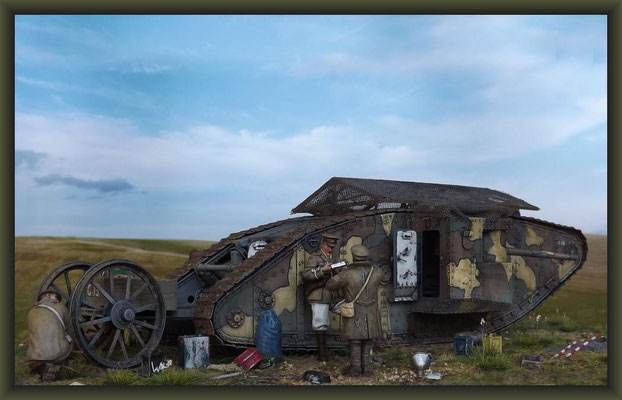 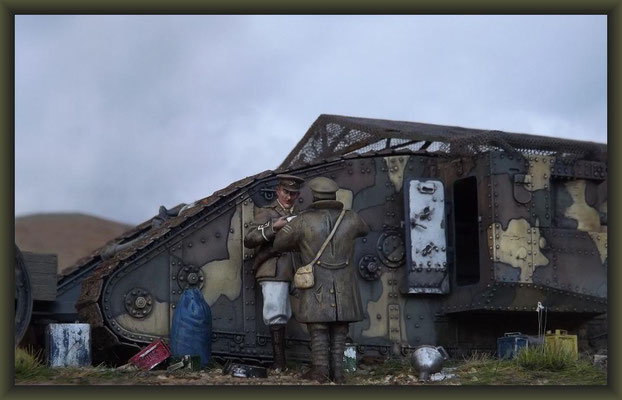 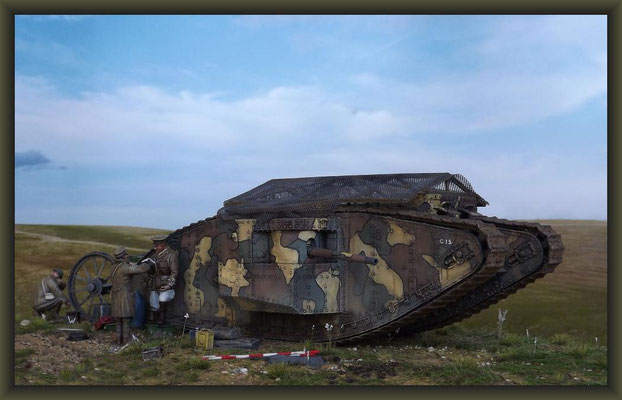 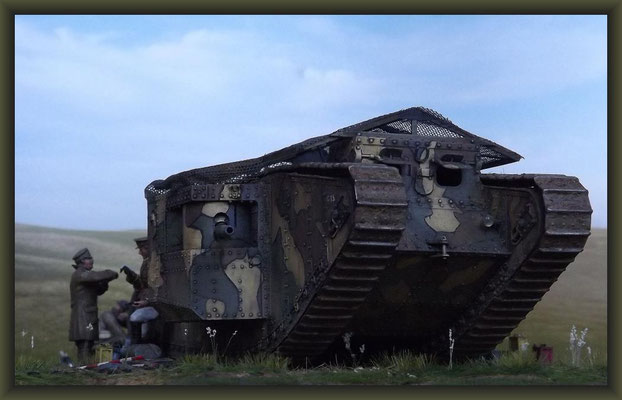 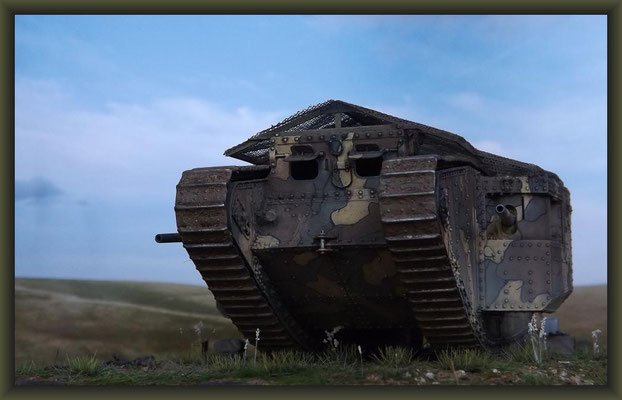 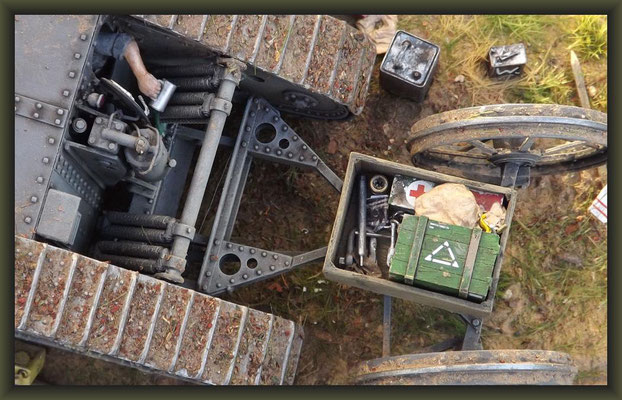 Taking in all the research, I thought I'd put in a few nuances.

Starting with the groundwork, I wanted to display the Landship upon a sea of soft undulating waves, with the figures and accessories being swept aft from it's bows.

The first crew member wears a blue boiler suit complete with an 'anti-bruise' helmet. If you look at his silhouette, it's no wonder they were sometimes mistaken for Germans when walking back to their own lines. An eight man crew requires a load of  nuts and bananas and so I've tried to recreate a sample of the amount: tin food, loaves of bread, P.O.L. cans and God knows what else. Living conditions inside these beasts were quite hairy. Cuts, bruises, burns and poisoning from the engines fumes were commonplace and this was BEFORE any fighting.

The pictures have only caught a little of my internal detailing but the naked eye sees more. Another thing is, when these King Kongs drove down an incline, fuel would run out under their sponsons, so I've put on some heavy staining below them.

On the starboard side a transport Sgt. is informing the tank commander of  the number of

great ape breakdowns along the way. The officer does not look pleased. Of the 49 available, there were 17  non-runners. At the end of the day there were only 9 Esau's left.

Below the original C.15. , ditched on a German trench. 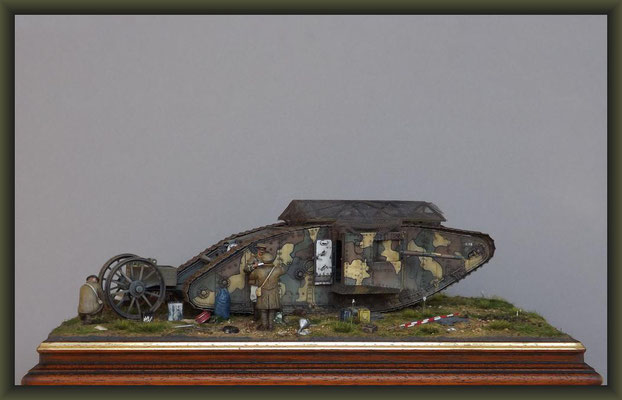 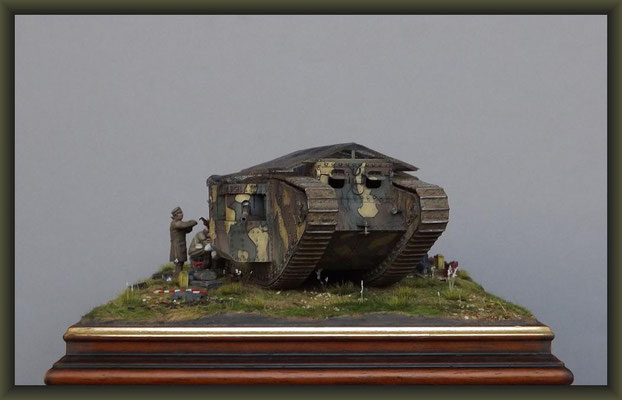 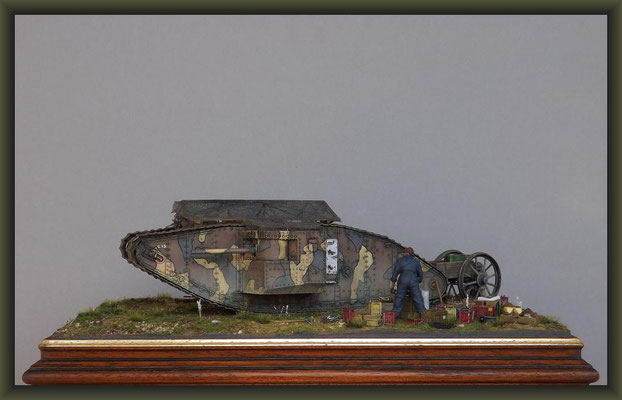 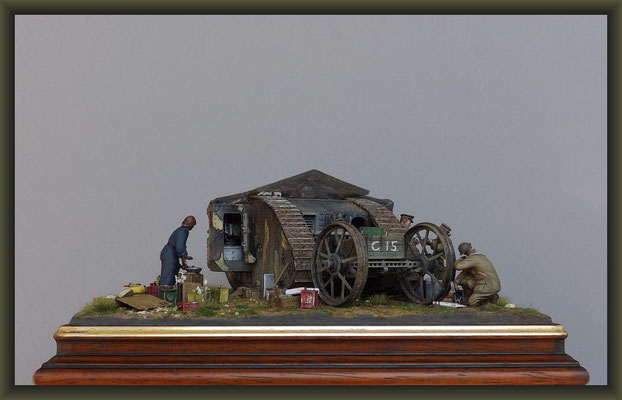 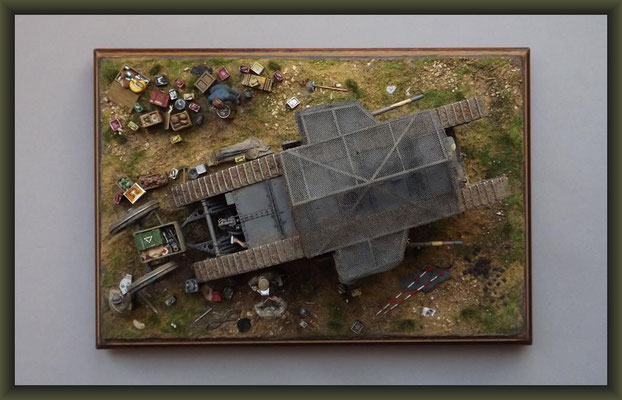 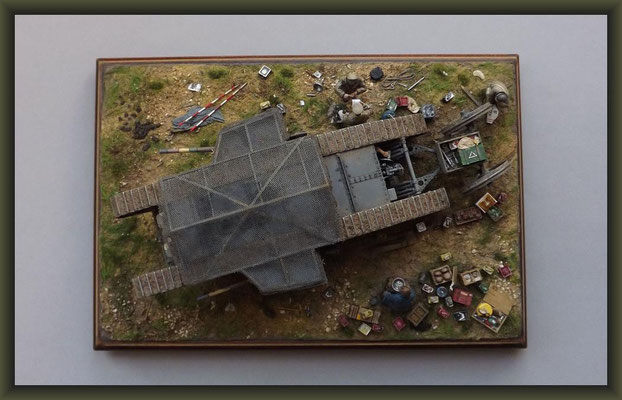 I'll say 'goodbye ... eee' with a few neutral pictures of the Neanderthal ... and in case you're wondering why I've written so much Monkey Business into my text, the idea for my Diorama grew from this picture ... please read the small print.