The death of Stalin in 1953 sparked a power struggle within the Kremlin.

The new leadership adopted a slightly more moderate policy in the wake of uprisings in East Berlin and strikes in Czechoslovakia, falling standards of living being the main cause.
Allthough the new Soviet leader Nikita Khrushchev denounced the old dictator in his Secret Speech (Feb '56) and the Warsaw Pact was formed in May, this did not prevent a summer upheaval in Poland.


On the 23rd of October, students in Budapest (many fuelled by the overtones of Radio Free Europe) took to the streets to demonstrate against their government - the MDP.

This Hungarian communist party was  headed by the infamous Mátyás Rákosi and his hated State Security Authority - the AVH. Matters escalated and many AVH personell and Soviet soldiers were shot out of hand. To add to the confusion Hungarian army units, pro and contra, were involved in the fighting.
Many incidents also occurred in the provinces but the majority of fighting was in the capital.
This led to the first Soviet intervention which resulted in a bloody nose for the Red Army.

Their burnt out vehicles (particularly heavy armour) standing as testimony of their underrating of the insurgents will and fighting capabilities. Petrol bombs (aka Molotov cocktails) thrown from buildings were just one of the improvised tactics employed against them.
The 28th brought about a ceasefire and the withdrawal of the Soviets. For a time it seemed that Hungary was indeed on the road to democracy. The new government sent a delegation to Moscow under Maj. Gen. Pál Maléter but when it's members were arrested and Maléter executed the writing was most definitely on the wall for the freedom fighters.
That writing spelled out two words ... Operation Whirlwind.


This second intervention was initiated in the early hours of the 4th of November, which brings us to my Dio.


The T-54 tank was new ground for me so I decided to go back to the basics of this 'cold war ogre' and what better place to start than on it's first active duty.

For this, I converted Takoms T-54B to a T-54-3 via Legends '49 up-date set. The build itself was quite enjoyable once I had the measurements and details sorted out. The Takom kit itself is good but there are some silly  mistakes. These mistakes could have been ironed out very easily by a little more research and time which would make it worth it's price.
Legend's offering was very good ... no gripes. I can't wait to use their resin turret on a burnt out version.
It's pretty difficult to make a plain green tank interesting, so I opted for my 'chameleon' technique on this one. Making the surface change colour slightly according to angle.
Opening the Zvezda Volksturm box allowed the third man to come a'creeping in from the cold. I bulked the figure out a bit and tried to make him as 'graaay' as possible (I had Mad Magazine's Spy Vs Spy in mind).
Groundwork was constructed to emphasize the second intervention (burnt out motar carrige) and the destruction of an old culture (crushed piano and picture). The advertising column I've plasterd with posters etc. of that time and opted for a 'Eastern bloc grey' background to add weight to the atmosphere. 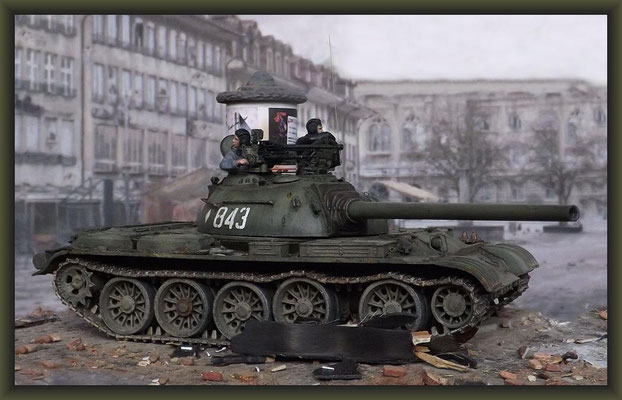 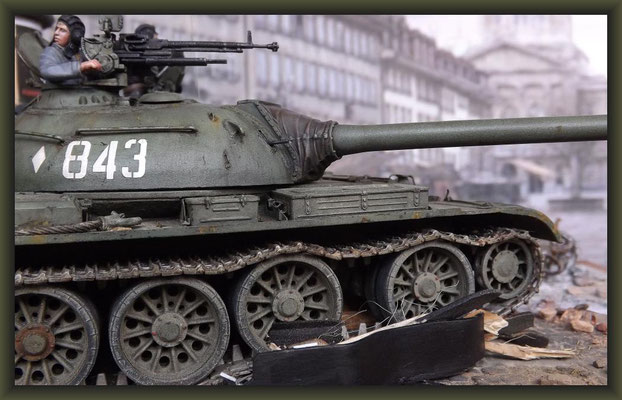 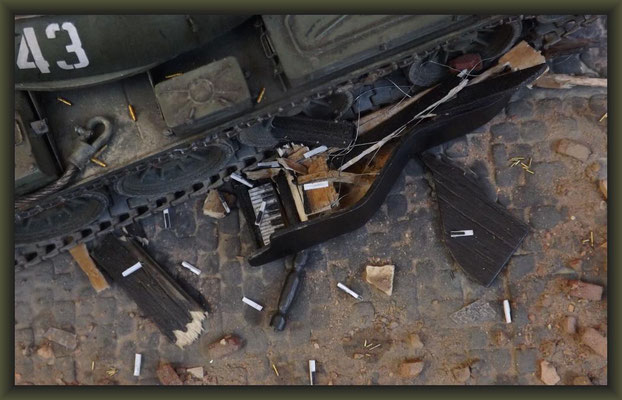 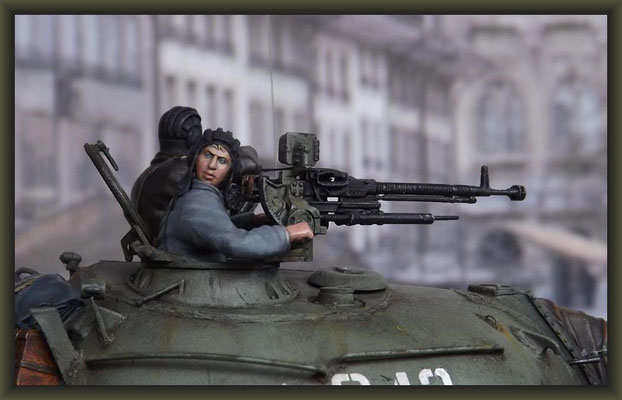 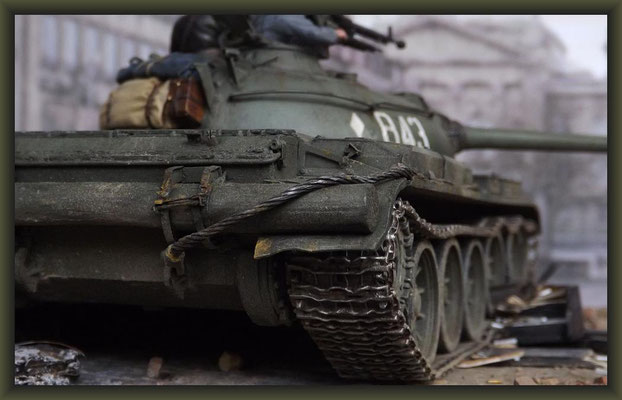 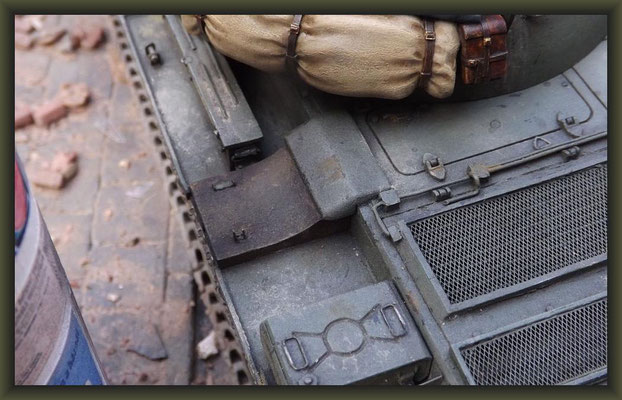 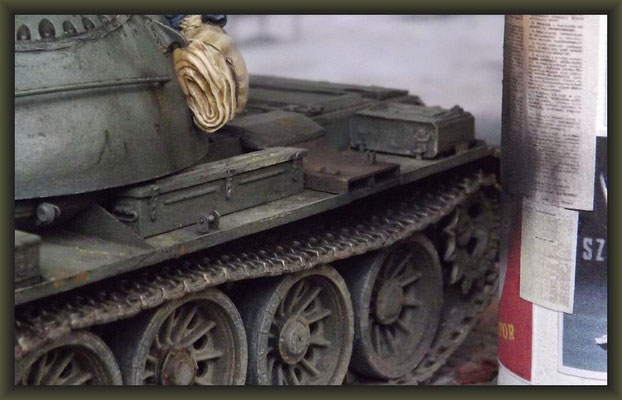 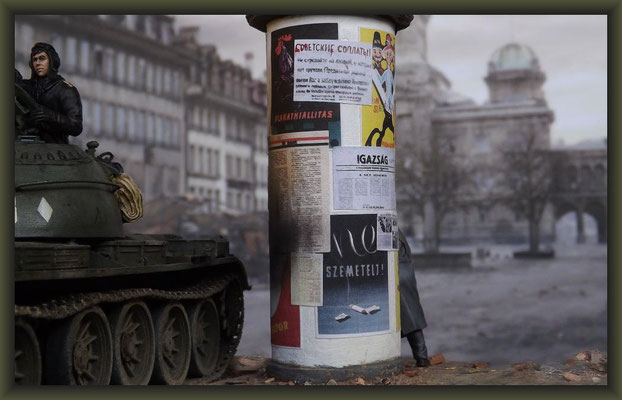 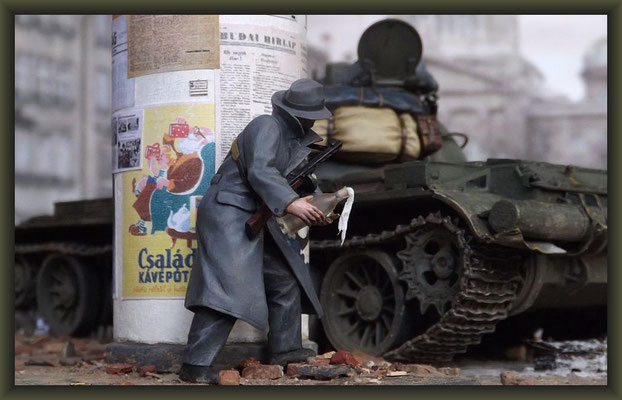 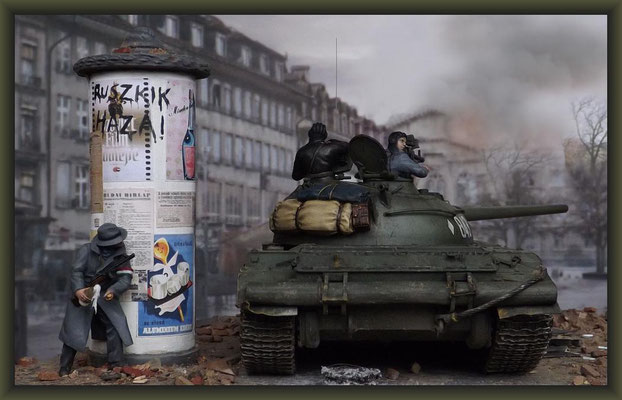 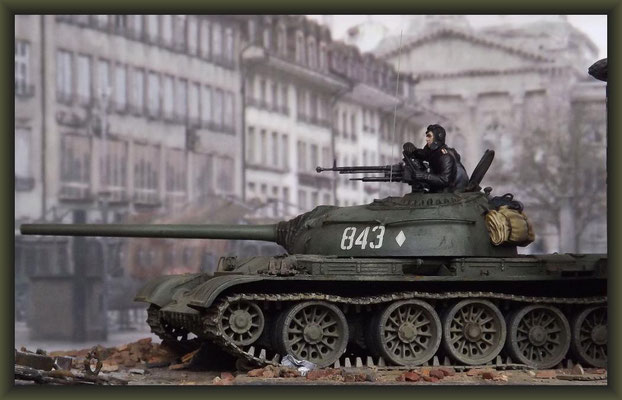 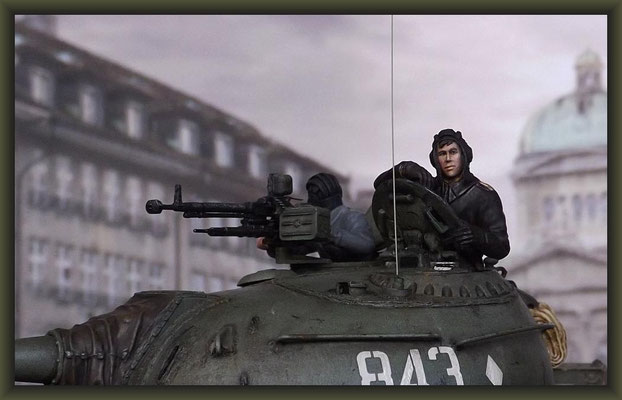 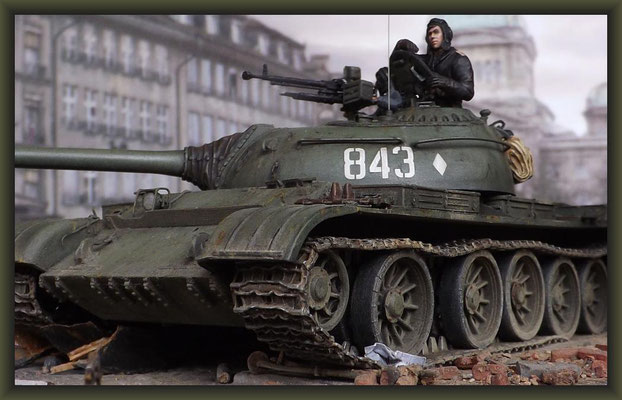 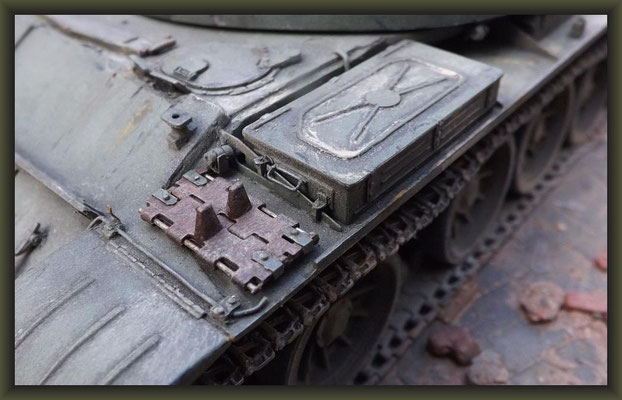 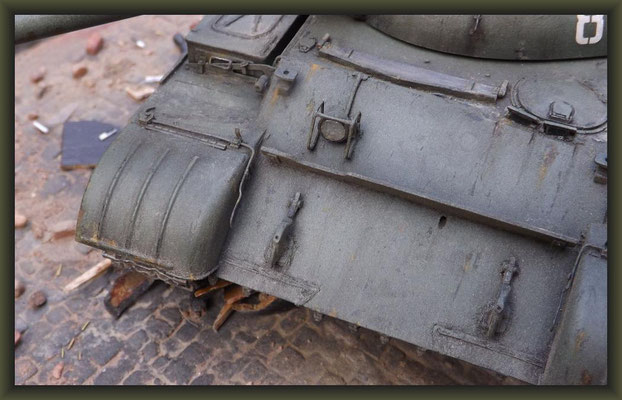 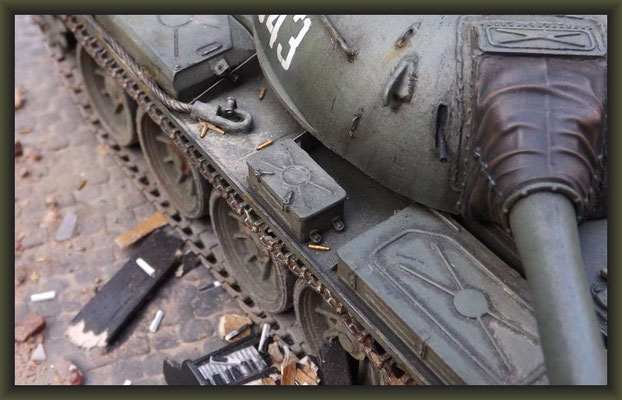 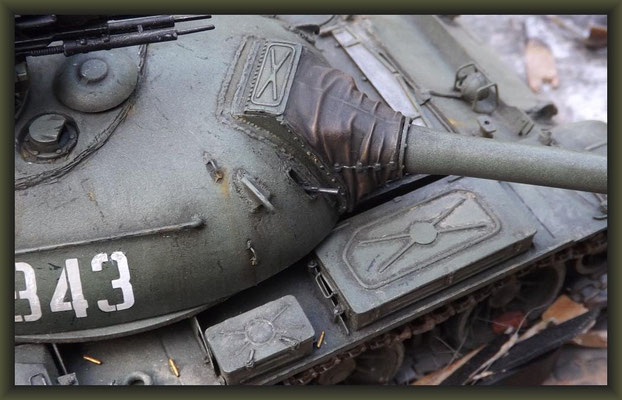 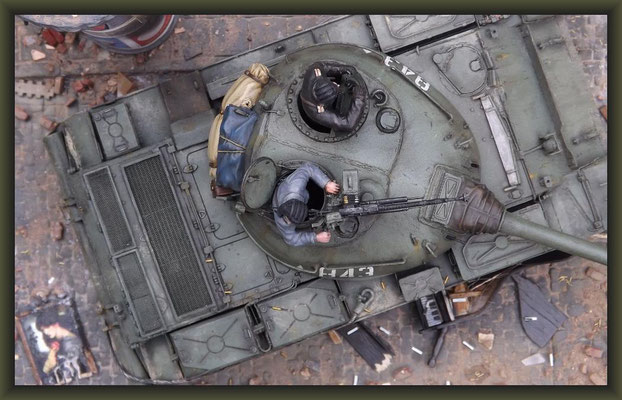 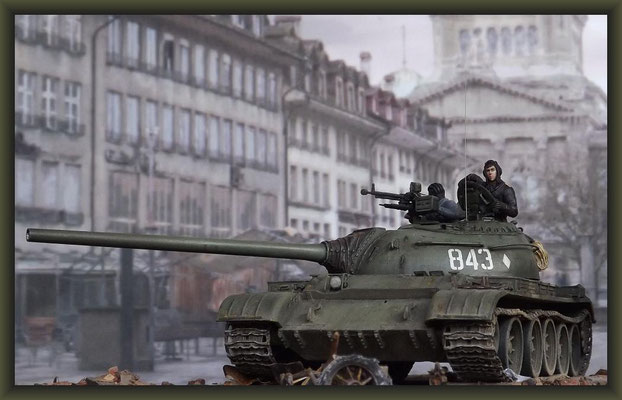 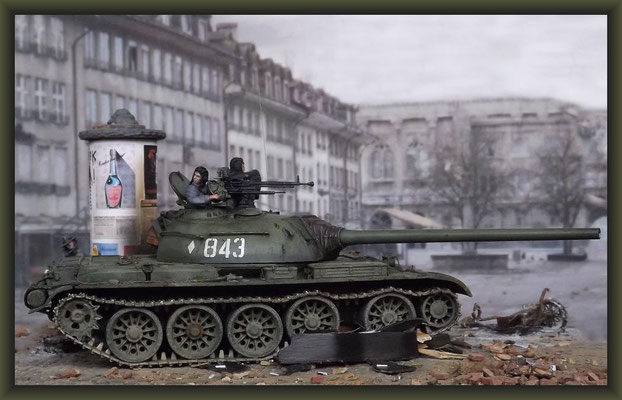 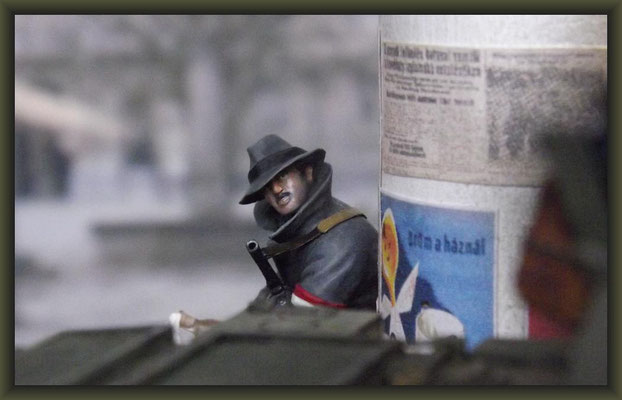 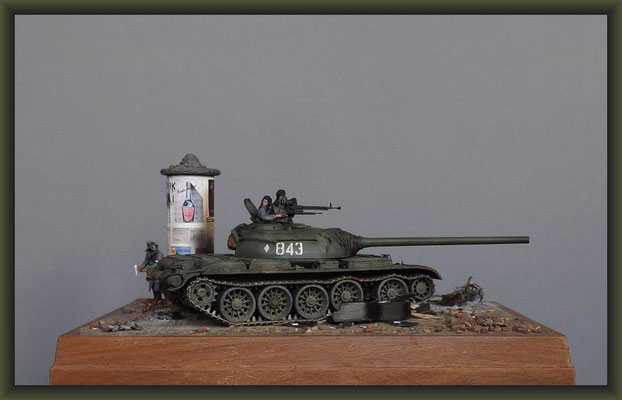 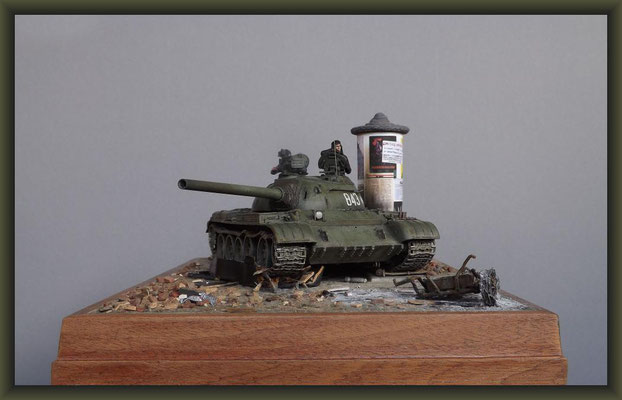 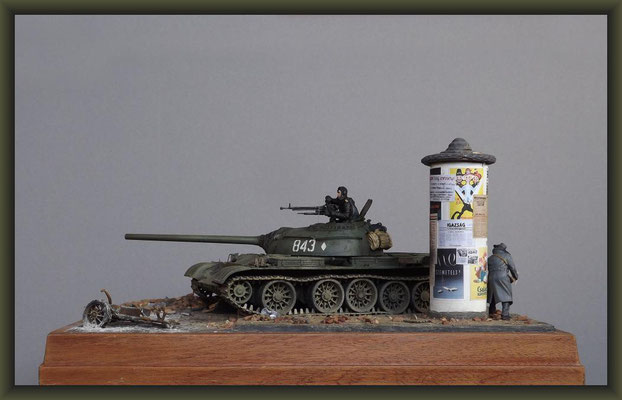 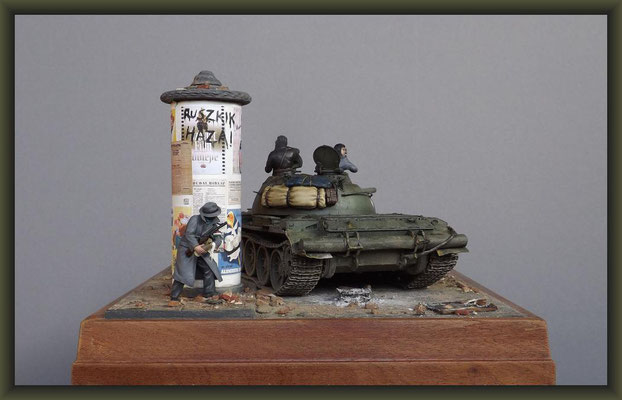 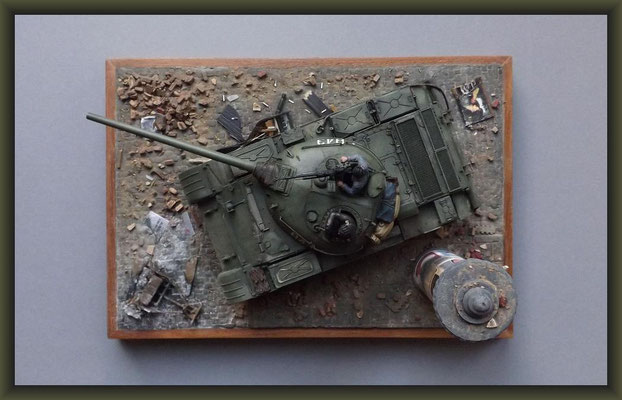 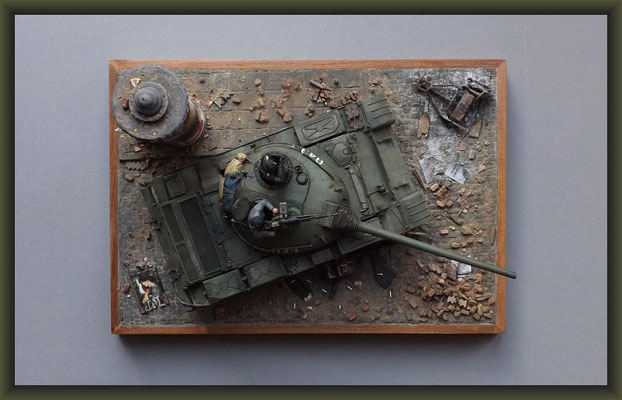 The Hungarians appealed to the West for military assistance but with the atomic age now firmly established in both camps and the Suez Crisis in full bloom this fell on deaf ears. Austria opend her doors to refugees and gave much needed humanitarian aid but by 11th November it was over.
The revolutions  'Butcher's Bill'  was 720 Soviet and over 3000 Hungarian dead. The latter certainly higher after arrests and subsequent executions.
Khrushchev was no Stalin, but for the West and in particular for the people of Hungary it was a case of "Meet the new boss ... - same as the old boss".