Strategically speaking, the Spring of 1918 found all three belligerents on the Western Front in reversed states of mind.
The French had ceased to attack "1914 style" since their moral breaking assault on the

Chemin des Dammes (April '17), which resulted in outbreaks of mutiny within their ranks.
The British for their part, took a leaf out of their enemies book and adopted a defense in depth stance. This came in the wake of the costly attacks of '17 and the requirement to take over part of the French left – the logical thing to do under the circumstances. For the German army however, it was a different story.
With ever dwindling national resources and the "guarantee" of their precious Hindenburg Line in question, there was only one thing they could do – attack at all costs.
This attack also had to be made quickly, before the build-up of American forces in France tipped the balance of power against them. The German Spring Offensive of 1918 (aka Kaiserschlacht) was subdivided into five main operations: Michael, George, Blücher-York, Gneisenau and Marne.


For my vignette I've opted for the second one here.
Operation George was meant to sweep upwards through Flanders and seize Ypres and the channel ports before allied sentries could challenge: "Who goes th ..." .
Coming on the heels of  it's bigger brother, (Op Michael) it had to be reduced in size, hence the re-titeling to Georgette.
Although I intend to make diorama's of the others sometime in the future, I think that this scene puts the whole of the German offensive into a nutshell.
What intrigued me about it all, was not so much some of the impressive initial advances but the reasons for their failure. The image of large numbers of hand-picked men, charging through thinly held allied lines only to find themselves on a road to nowhere, just dosen't add up at face value.
The master planner, General Ludendorff, blamed logistics and in my mind is partially correct to do so, but even then, only superficially. His plans for success were concentrated primaly on the new Hutier or Stormtrooper tactics. All well and good, but what supported them in turn were frayed line infantry. Worn out veterans and the last class of fresh recruits. Both new to open warfare with "Flanders Flu" coming to bloom within their ranks. Communications as well as the general mind-set was still finely honed for trench warfare. Everything was in the shop window but precious little on the shelves.

Stormtroopers are designed for one specific task only, that of breakthrough. When that has been achieved, these "asphalt men" are to be relived ASAP by normal infantry who exploit their gains.  After some weeks in the line, these specialists, with dwindling numbers and strained morale must have been feeling like cannon fodder. Their "terms of contract" with their "bosses" were being brought into question.
They were also dependant on field guns, to "shoot themselves" forward. Alas, those batteries, as well as their horses, were in a sorry state. Low on shells, riding a narrow timetable and galloping roughshod over the shattered ground of previous years, the supporting artillery became a case of too little – too late.


What was a blessing for the Germans, as well as a curse, was the discovery of the abundance of  rations stockpiled behind the British lines. After being told over and over that their enemy was starving, even the most loyal must have had serious doubts as to the integrity of their high command. Although some units did quickly partake in the "delicacies" of British Army fare, the myth of the whole army gorging itself on corned beef and plum pudding, is a post-war excuse.
There's a saying in Germany that "the fish rots from the head", meaning those responsible for failure are the ones at the top. Therefore, the blame must rest with the over optemistic planning by Gen. Ludendorff, who relied too much on tactics and the opportunities that they may present.

Although Op Michael bit out a huge chunk of the allied line, "Hit them first and then we'll see", dosn't work on such a scale – such operations need clearly defined realistic objectives, not to mention a plan B.

The vignette:
A 360° presentation is not always possible but it's turned out well here.

Although the V.P. Figures are a little on the large side they fit quite well with I.C.M. spares.
The signpost has been "vandalized" by some "Tommy's" as not to help the attackers get their bearings. Maybe you'd like to take a map and twist it back around to find out where the hell we are 😉
The Brits have also left quite a bit of kit behind. It must have been rough … they've even forgotten their rum ration.
Still there is some "hard-tack" that the young stormtrooper has found in amongst a pile of "horse tulips". Fair play, he is offering a handfull (!) of the stuff to the m.g. gunner who's incredulous look says it all. Maybe he's not in the best of moods anyway. Would you be, after lugging around an M.G.08/15 ? The thing weighs 48 1/2 lbs.
Lastly the junior officer, who I have fitted out with a "Rotzkocher" (translated harmlessly into English as: pipe) is trying to work out the … er, ah.. way to the vital rail junction at Hazebrouck. No matter, because when they do get there, they'll be "refused entrance",  … better not even mention those mirage-like channel ports.


Initiated on the 9th April and ending twenty days later, Operation Georgette gouged out a salient some 10 miles deep and 16 miles long into the British and French lines. However, burdened with their own problems and up against an enemy's fighting retreat - including some tenacious defensive actions by the allies, it's no wonder  the whole shebang ground to a halt. 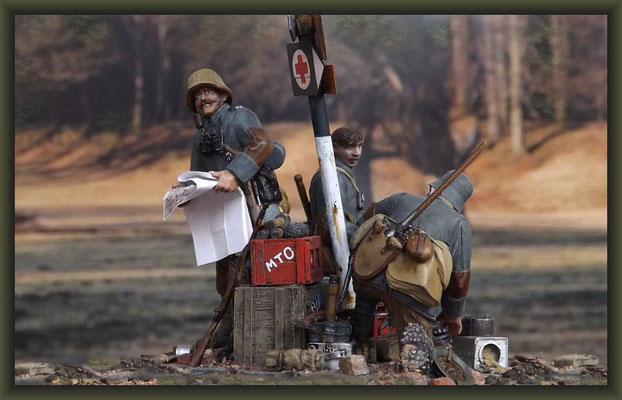 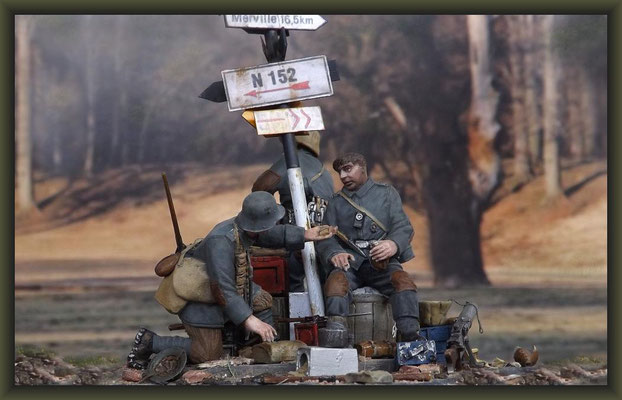 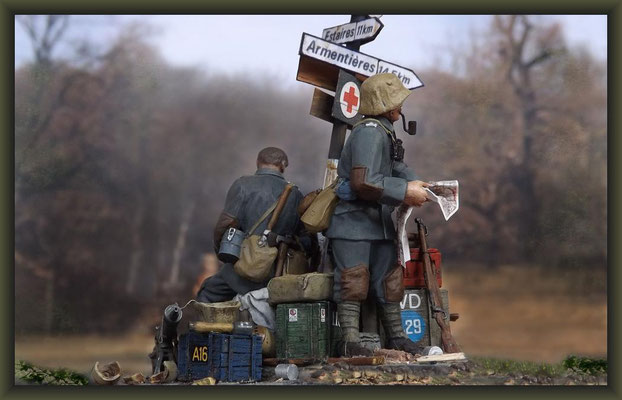 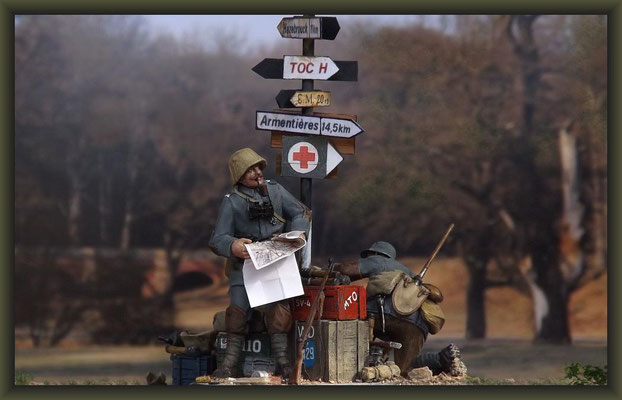 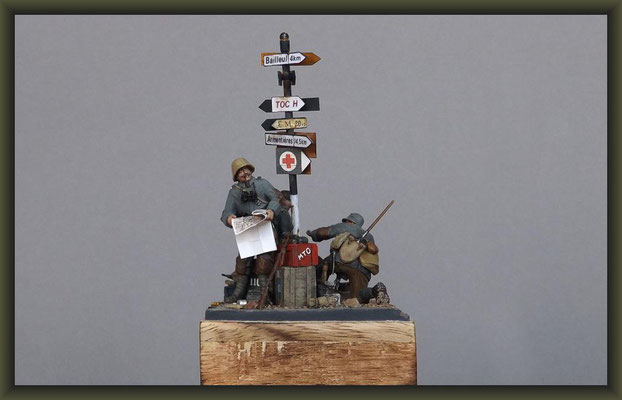 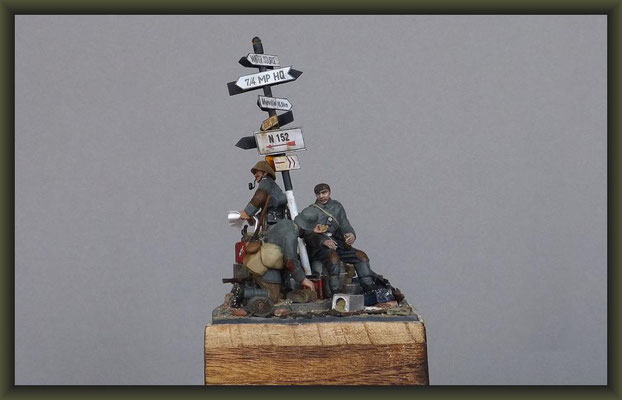 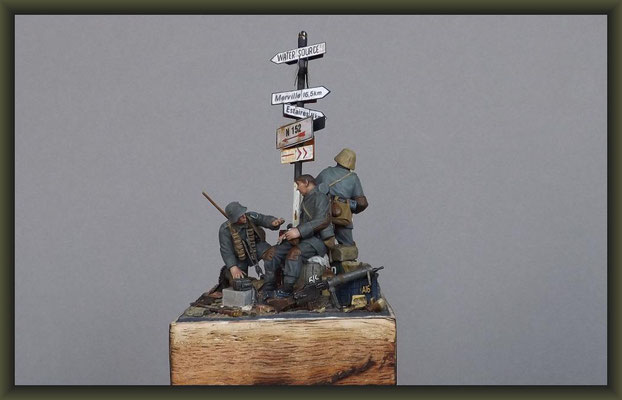 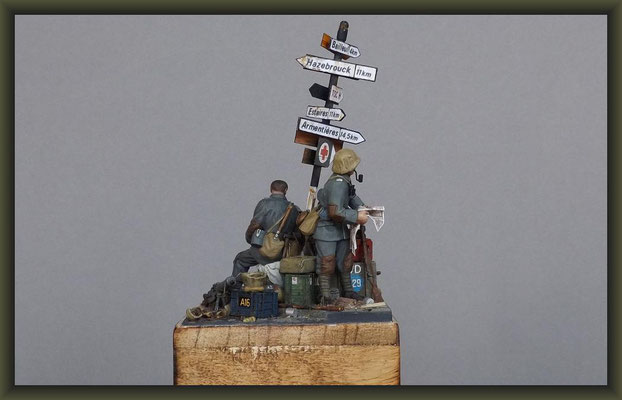 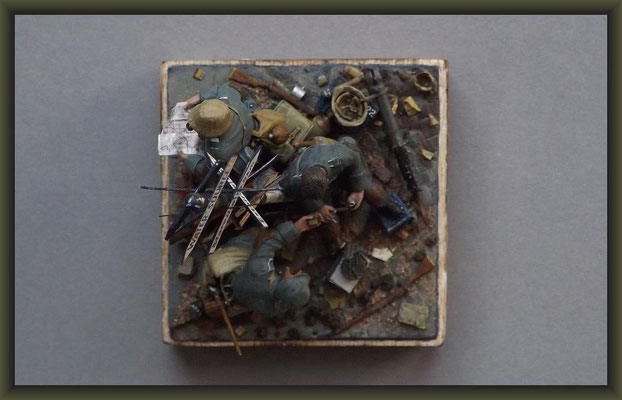 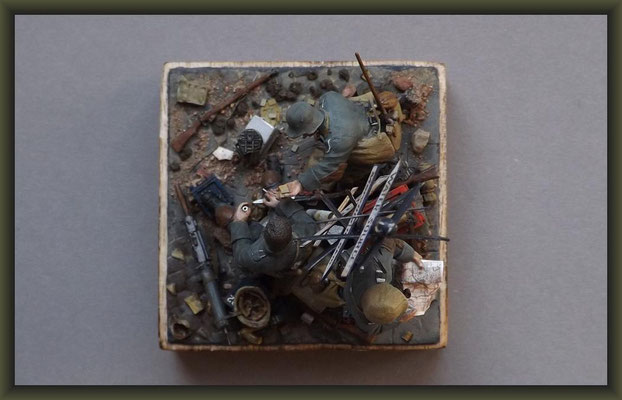 So then, another one bites the dust.
I hope I didn't drive you 'around the bend' too much by the 'umming and ahhing' in my mini building report. It all had to do with the fact, that the German Imperial Army, on this occasion, were all half dressed up with maybe somewhere to go.
As for my part, I was deliberately 'leading you up the garden path' with my uncertainty - you were in good hands all along.

I KNEW EXACTLY WERE I WAS GOING RIGHT FROM THE START.

Bristling with confidence, I proudly present my next project.
A well planned and mapped out, two figure 1:35 vignette
(er.. well the figures are 'kinda-sorta' a bit bigger).
However, the title says it all - I've no doubt of were I'm off to with this 'un ...
even though I've already used up the trench walls.
A slight "unprofessional" fauxpas (eng. Forks-Packs 😏)  on my behalf, is that
the equipment … and weaponry, have … er ... gone as well.
Matters not, I've still got 1½  figures … lost some bits of them. I s'pose if I could ... er... um... nah.
So: "Kopf hoch und folgen Sie mir" - as I lead you in the vanguard of the German Spring Offensive of 191 ...

Off we storm ... eagle-eyed onto the next horizon.

Might as well drag along an extra figure … at least I've found some of the bits to ... er … maybe ... make a slow start.

Right, no more 'beating around the bush' this time.

First off I've clubbed the basic forms together with the aid of some good old bulky Italeri upper torso's. 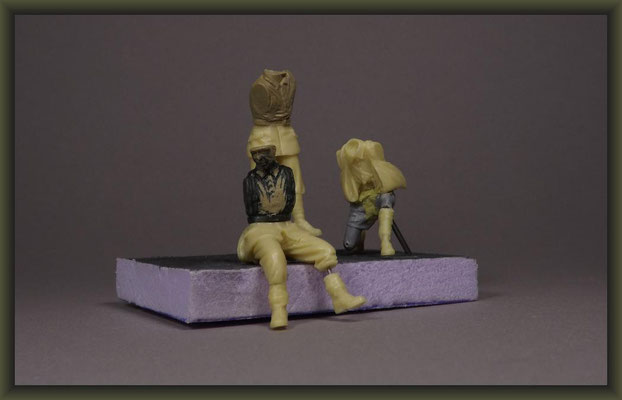 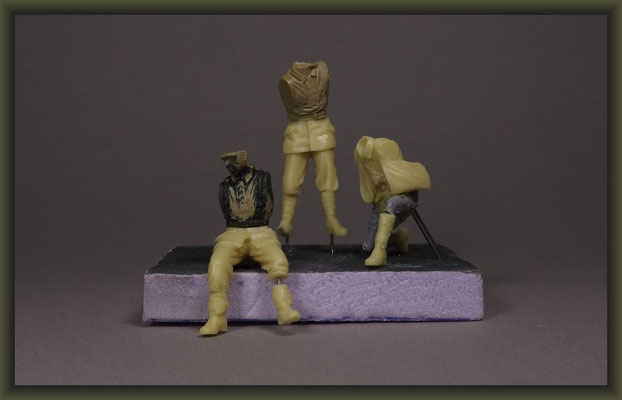 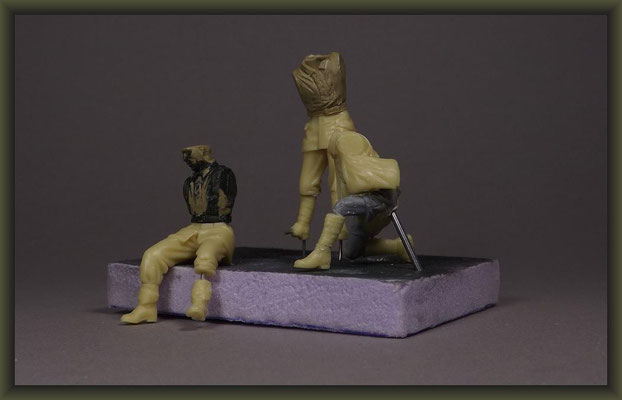 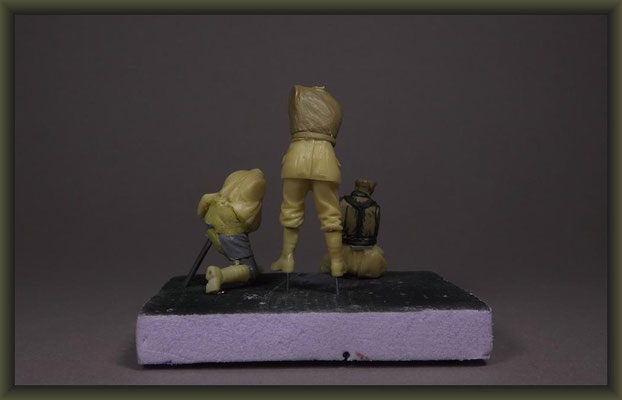 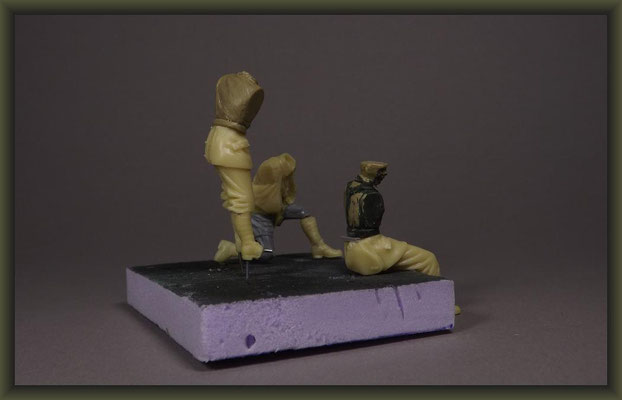 Next stop was to clean the accessories and test fit them on the figures, this is important as you don't want anything coliding with other parts when it all comes together.

After this the sculpting may begin ...

There, no more wandering around, I've got my bearings right this time – see you at the terminus.

I know this is supposed to be a vignette of the Western Front, but for the moment it could easily be an Eastern, Balkan or Alpine scene.

So be aware, these three could very well find themselves …