In the early hours of the 21st of Febuary, General Erich von Falkenheyn initiated Operation Gericht.

His strategy was to draw the French into a battle of attrition, that is to say both armies keep sacrificing thousands of troops to see which one gives up first.

The area that he chose was the somewhat antiquated and largely disarmed fortresses of Verdun, a sector that could only be supplied by one small road (La Route).

His main reason though was that the small city was a bone of contention between the two nations for decades. His reckoning (and hope) was that the enemy's nationalistic pride would feed more men into defending it and duly crack doing so.

The battle saw the largest concentration of artillery to this date. Millions upon millions of shells of all caliber were fired and all of this into a relatively small area.

One Frenchman observed - almost with fascination - how men were killed by artillery, buried, disinterred and buried over and over again, turning the mud green.

No wonder it was to become known to the French as Le Chaudron and to the Germans as Der  Fleischwolf.

I think we'll take a break here and turn to the vignette.

At first I wanted to build a Diorama with an artillery piece / truck.

After some brooding, I decided that I needed something more personal and hemmed in with the atmosphere of death omnipresent and the horror that adorns it. I had in mind a German infantryman on patrol through one of the many batterd forts. The sound of the rats above making him spin around to confront, in half light, an enemy pointing a 'rifle' down at him. As his senses take in what the form actually is he staggers away from the wall ... and out of cover.

So, I'll let you make your own mind up as to who really is Der Tote Mann here.

I thought it would be apt to take the name of one of the forts for my title, the action of course could be anywhere in the sector.

I hope you don't mind me keeping a few things secret from you. It was'nt easy - believe me !

The hardest (and most important) part for me was getting the right angle with the rifle and girder to form the crucifix.  That's why I made such a fuss about enlarging the base a little.

Taking it all on board this small work sums up my thoughts and feelings of this particular hellhole.

One by one the forts fell and for a moment it looked as though the Germans would break through particularly with the help of a new type of gas - Phosgene.  Difficult to detect, ten times more toxic than Chlorine but causing no spasm on inhalation. It also could have a delayed effect - with victims - showing no prior symptoms - dying hours after exposure.

However, under General Pétain, La Route was widend to become La Voie Sacrée and fuelled in an average of 50,000 tons of ammo and 90,000 men a week. Whether or not the famous

ils ne passeront pas can be attributed to Gen's Pétain or Nivelle makes no odds - the French line held.

Counter attacks were made at the end of October and November with forts Dunamont and Vaux being retaken.

The last action - Louvemont - 18th of December marked the end of the battle. The victory went to the French but it was a pyrrhic one. The casualty list for this - the longest battle of the Great War - was 362,000 French to 336,831 German. Falkenheyn was replaced by Hindenburg.

The formers battle of attrition strategy to my mind only adds weight to Groucho Marks's citation: "Military Intelligence is a contradiction in terms". 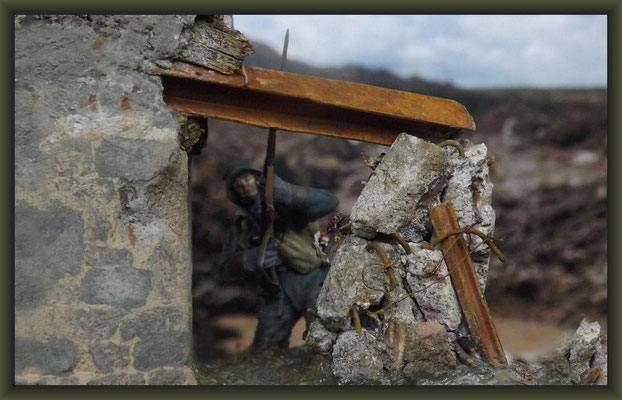 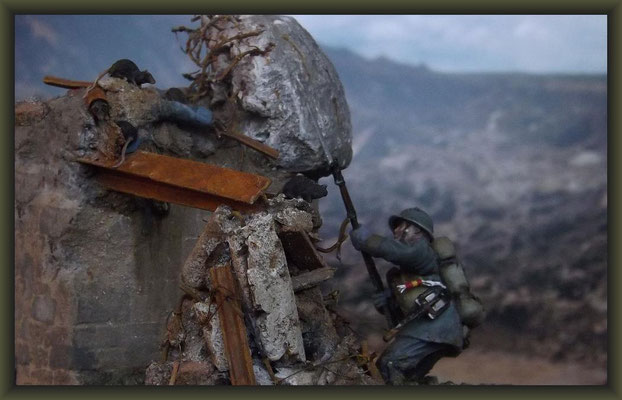 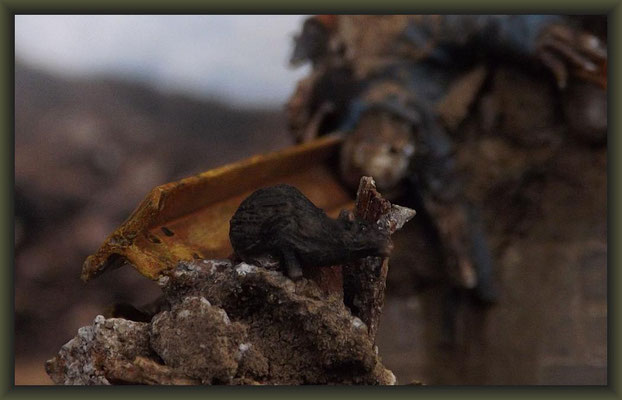 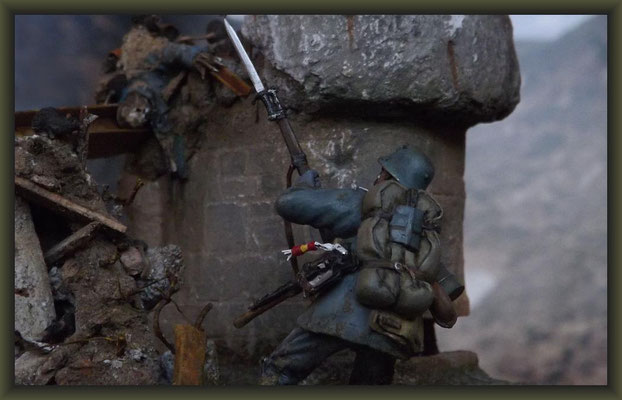 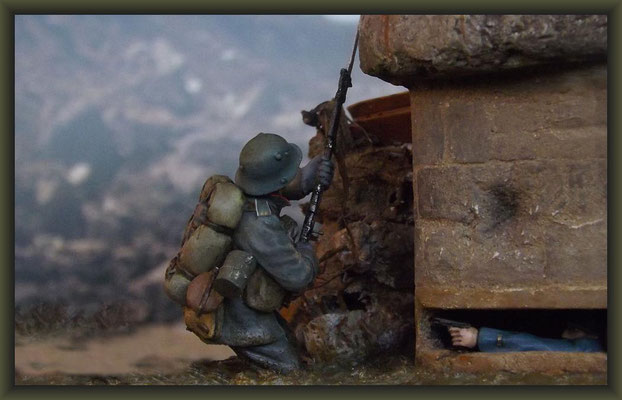 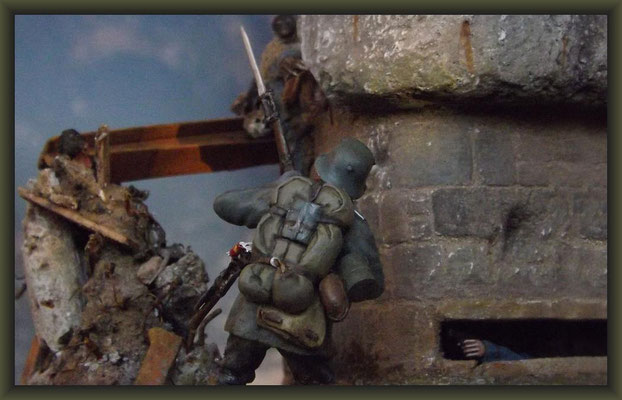 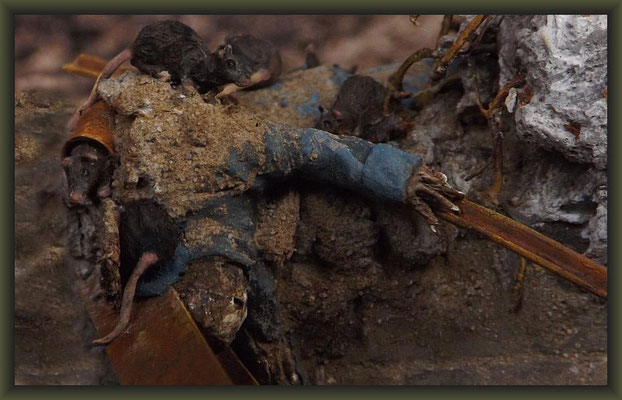 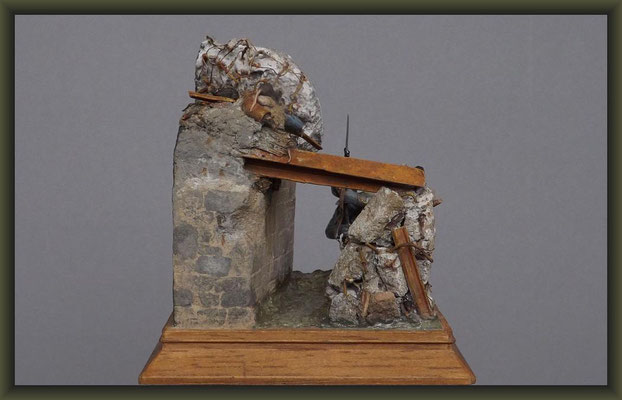 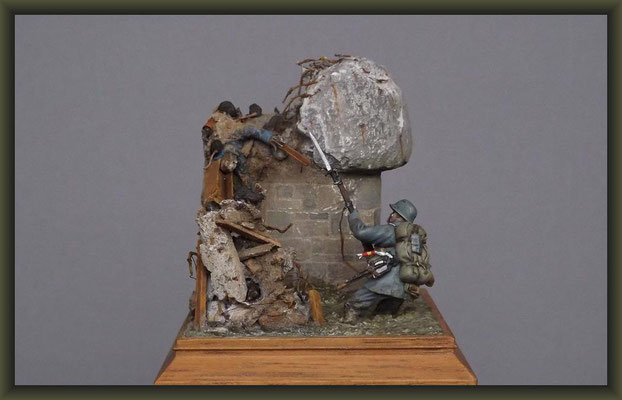 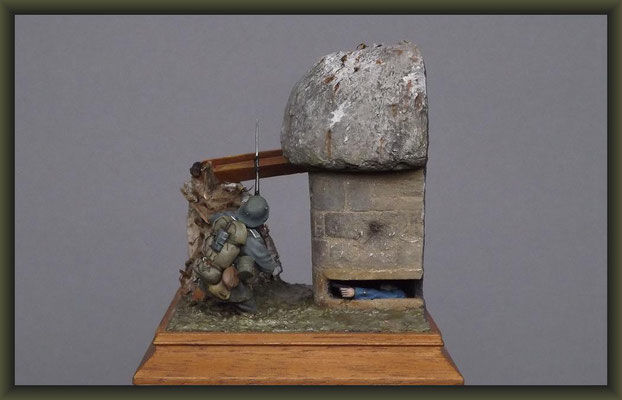 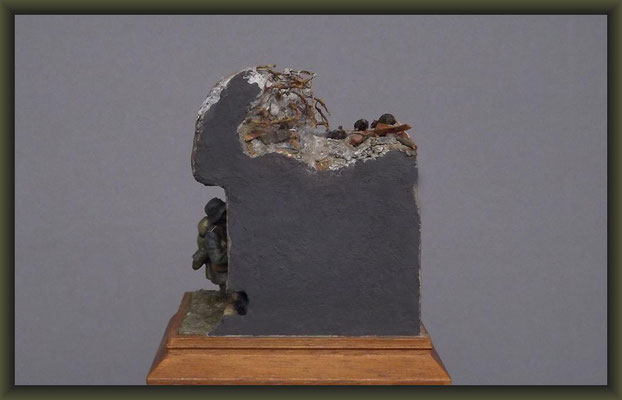 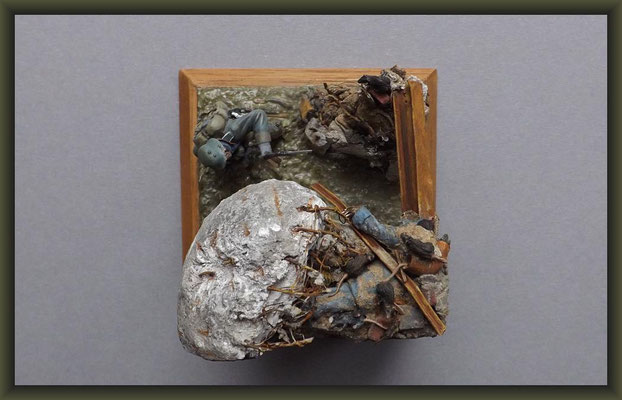 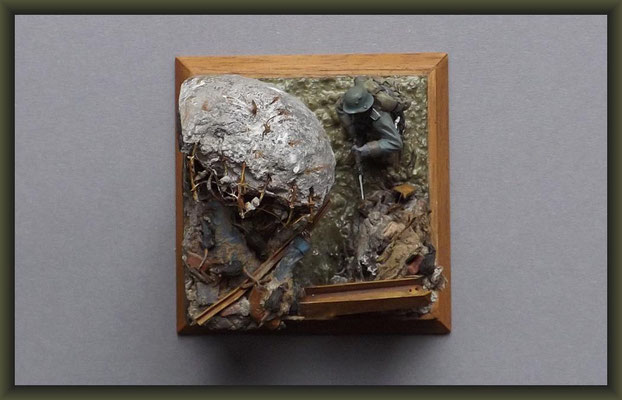 Looking at my slowly growing collection of WWI projects, you can see that I've been concentrating on the neutral or slightly amusing aspect of  the Great War.

This is not that I wanted to suggest that it was all a quiet or Happy-Go-Lucky conflict, but more towards depicting a scenario per se. The humour in some of my works I view as a spark of humanity in what I (born '62) can only describe as an unimaginable abyss of the human condition.

As I researched the Battle of Verdun, trying desperately to find some spark, some gesture of humanity, I became more and more disillusioned. What I found was a 303 day killing zone where even death itself was perverted.

I will not go into details of what I've read about this battle (if you're up to it there's more than enough info available), but I wanted to have one symbol of this the most protracted of obsenities of the '14- '18  war.

A few words about the vignette. I'm only using one figure from the V.P. box, the other 'started life' as the 'buckboard' driver from the Italeri Horse and Cart set. The V.P. set itself is very good for spares and as a basic structure. The downside is the fact that the height of the trench is a snipers wish. Also, it's more in scale (only MHO, Francois !!) with 1/32 - 54mm.

Vignettes are tough, the eye focuses on every mistake /detail, whereas with a Dio you can 'disperse and collect' things easier.

The hardest part (so far) was the shaping of  the styroform, and there are still area's that need
more attention (both left upper arms - too long?). Anyroad, we've a way to go here.

One last thing ... for the first time in my modelbuilding life, this is one project that I'm NOT going to enjoy and if you find it disgusting ... then there's hope for the both of us. 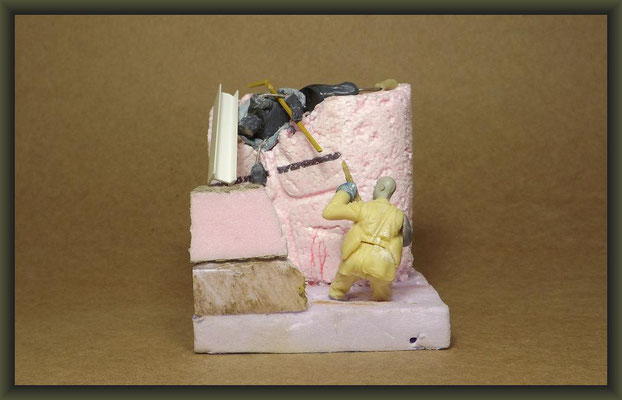 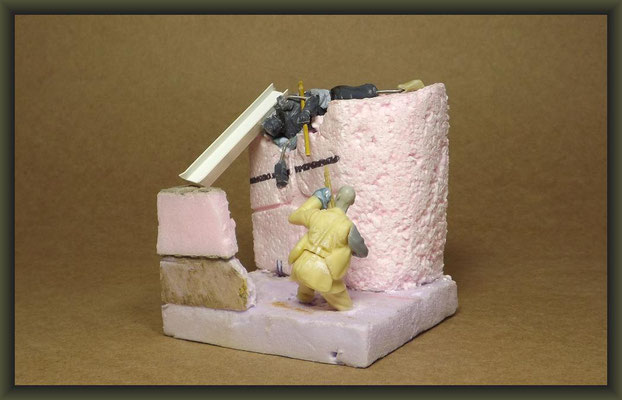 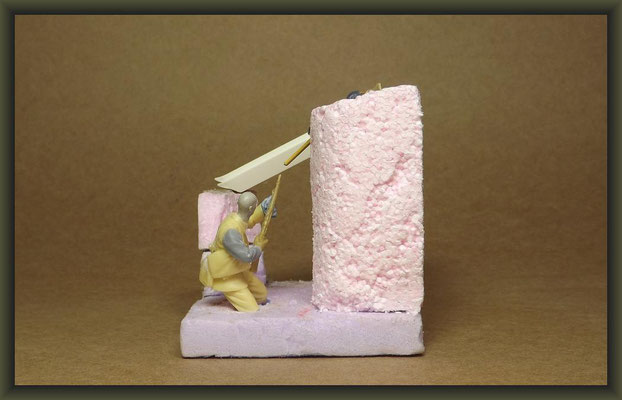 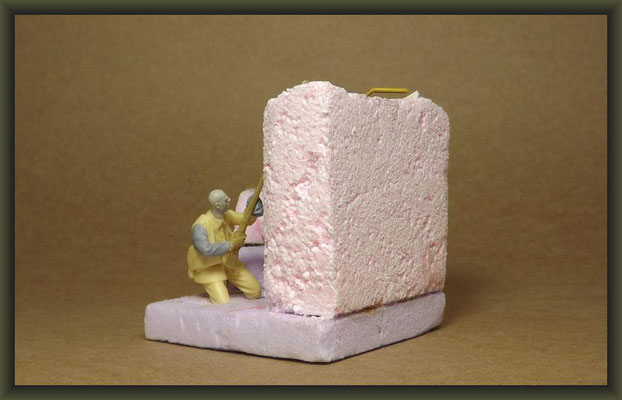 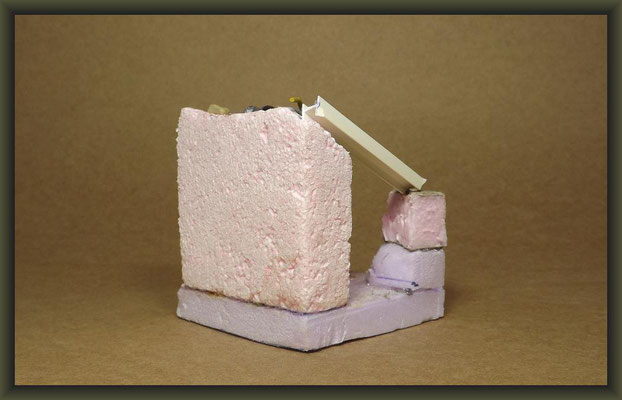 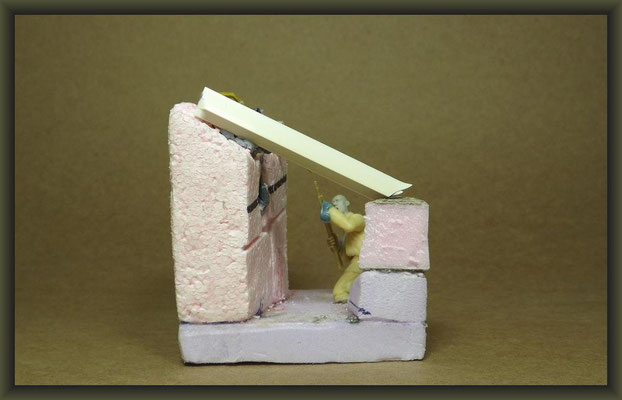 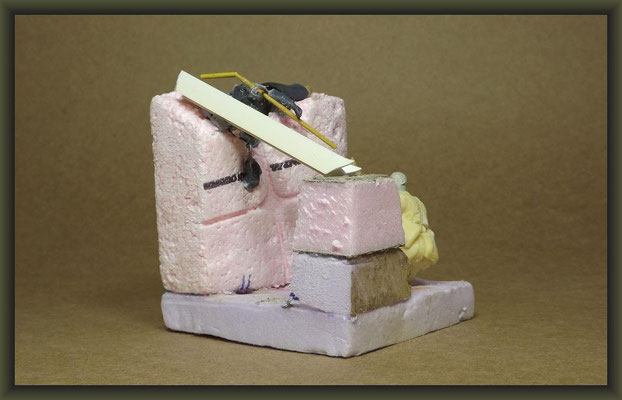 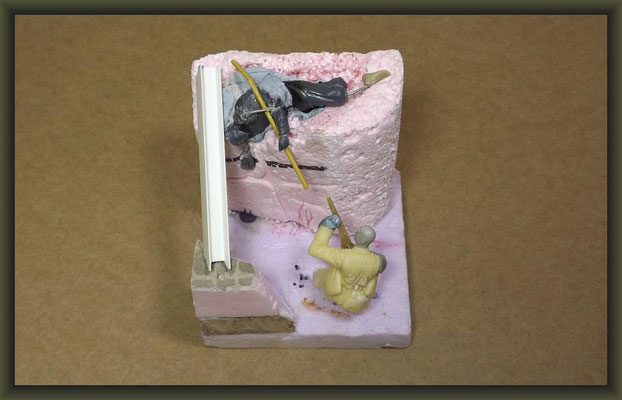 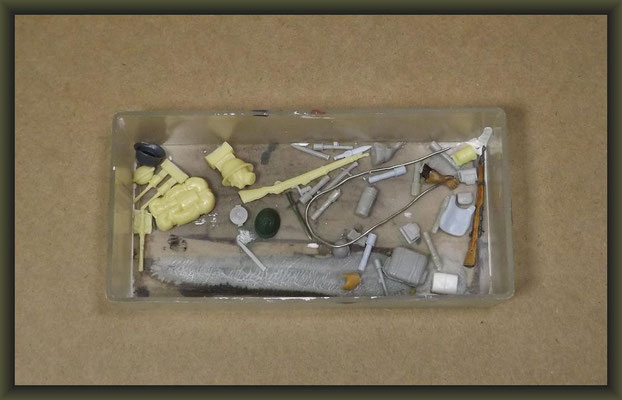 I've added a bit more kit to the figures and plaster to the bunker. I could have built a blasted trench scene but I needed something more typical here. Many of these fortresses were constructed of stone in the 19th century.

However, as artillery firepower increased they became in need of 'modernization' in the form of concrete and earth cappings, some of up to 13ft thick. As that height would'nt work on a 54mm vignette, I've gone for one of the smaller blockhouses 'somewhere' on the Verdun front.

This one is more difficult than it appears as a millimetre in positioning can give a different effect every time. Anyhow this is the setting I've decided upon, so it's up to me now to make the best

I've spent the day on bringing out the old forts stonework/concrete capping.

I know the crown looks as it's about to fall off but if your minds eye can picture it being anchored to a greater mass 'further on down the line', then everything will make sense.

Hmm ... if the thing was that badly 'duffed-up', I'd better carve some cracks into the morceau. This phase gives me time and room to morph myself into the Schwerpunkt of  it all.

I've shortend both upper right arms but the deceased still needs to be more en garde ... if you catch my drift.

A 'rendezvous' requires Intimität but I can't help feeling, I need a bit more Platz here.

Basically, the story is that the landser has been patrolling the blockhouse walls from left to right, and has spun around in the mud after 'sensing' a presence behind him.

I've enlarged the base (8mm front and right) to give me more 'turning room'.

Kitting out the figures, I noticed that the V.P. offering had the early type tunic (M1907/10).

Although this was worn throught the war, I've altered mine to the simplified M1915 version.

Well then, better get the airbrush up to pressure and give them a coat of acrylic to show up the glitches. 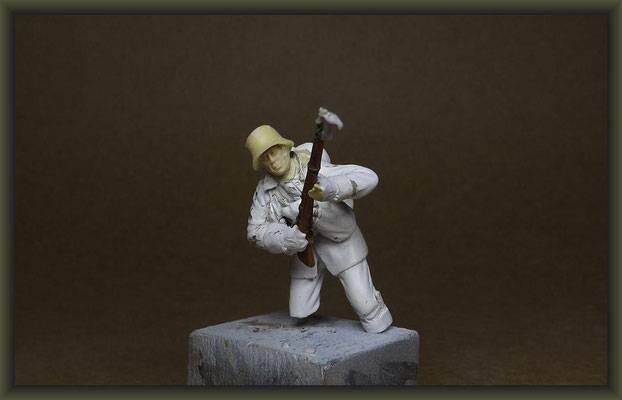 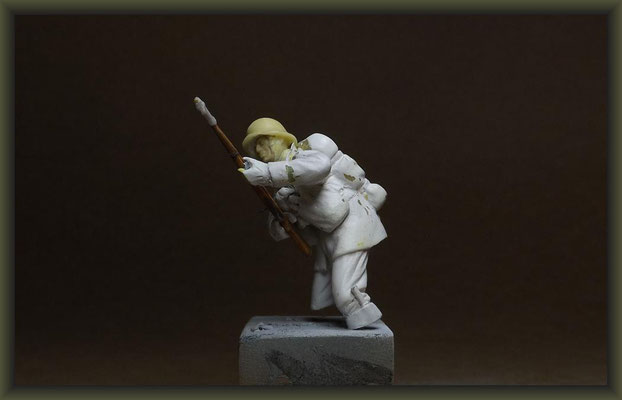 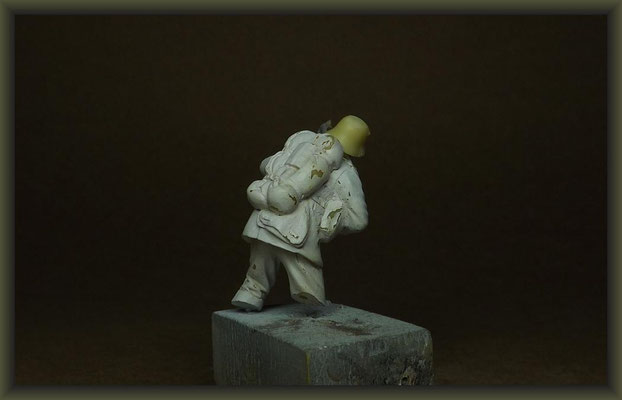 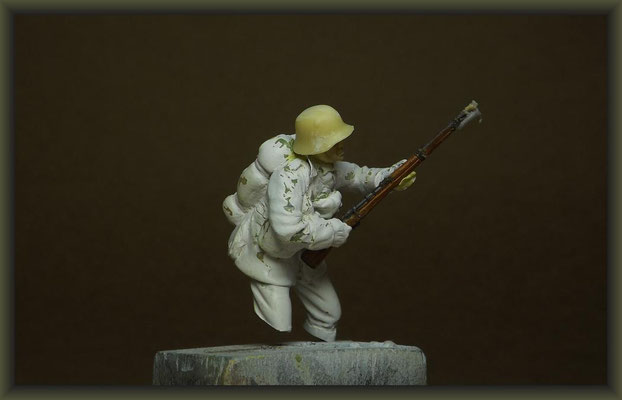 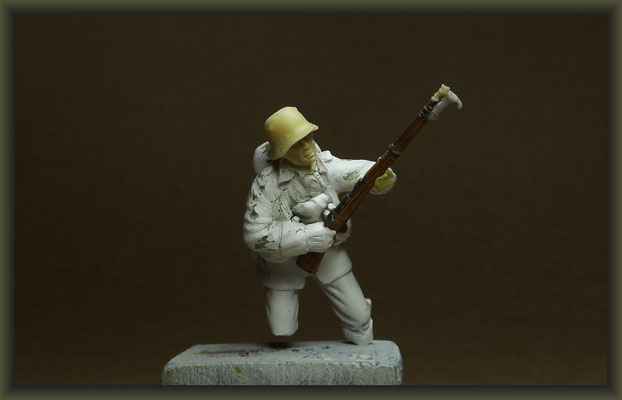 I've changed the Germans head (again), this time I've used the V.P. offering and replaced the laughing face with a more sober one from that range.

The corpse I've left largely intact, as most of it will be sunk into the ruins. I don't think there's much more work I can do on this one particular 'corner of hell', so it's base coat and painting from here on in.

The Schütze has made a last minute reappearance prior to painting. I've altered the left upper arm and  added some rivets to his 'coal scuttle' Helm.

I know that this one is taking it's time but other projects have demanded more of my attention recently.

Still, as the battle officially ended on the 18th of December 1916, I'm still within my chronological timetable.