"Every cloud has a silver lining".


On the morning of the 25th of September at 05:40am, the first British gas attack of the Great War 'kicked-off'.

The 'cloud' in question was a mixture of chlorine gas and smoke, causing death and mayhem over the front lines of the German 6th Armee. The 'silver lining' for the British 1st Army was the capture of the town  of  Loos. This attack was also in answer to the first use of chlorine gas by the enemy (Ypres, April '15).


Amongst this descent into retaliatory hell - far beneath the shimmering lights of the Phosphorus smoke bombs - something even more bizzare was occuring.I suppose one could say a 'legend was glowing'.
It radiated initially from one Sgt. Edwards (1st London Irish Regiment) who insisted that his men kick a  football towards the German lines. As a demonstration of bravado ... or maybe to add some humor to an evil and surreal scenario ?
Loos was captured and hailed as a victory, but the 'butchers bill' was high - over 59.000 casualties, twice as high as their foe.

Perhaps in retrospect then, it's fairer to say: "Every silver lining has it's cloud".


All this happend a hundred years ago to the day and if it was'nt for the 'game', the battle would  be forgotten as many others have been, buried under the shadows of the campaigns of horror that were to come.

In sharp contrast to the abovementioned events, I had quite a few enjoyable hours of modelling with this one.

Starting with an old Tamiya U.S. Infantry 'clothes peg' (extended to 54mm), adding arms, legs, epoxy putty and other 'bits', it gradually took on it's own form.

During the initial reasearch for this project I found out, that the soldiers taking part in this particular action were fairly heavily burdend, so I had to 'beef up' the 'little fella' so to say.

The 'P' or Tube Helmet ( in it's early gray/blue shade ) was also interesting to sculpt as were the epoxy resin casts of the puddles and water.

A short building report of the figure can be found on a German Modelling Forum.

I think though that the pictures are self explanatory ...


On that dark wet Sunday morning, wrapped within a shawl of malignant stratus, struggling under equipment, sweating and gasping for air inside a musty cotton bag, with perhaps death or mutilation only seconds away a 'match' took place.

It was a match that burned the London Irish Regiment themselves firmly into the history of the Western Front ... a light that was to become known as the legend of the Footballers of Loos. 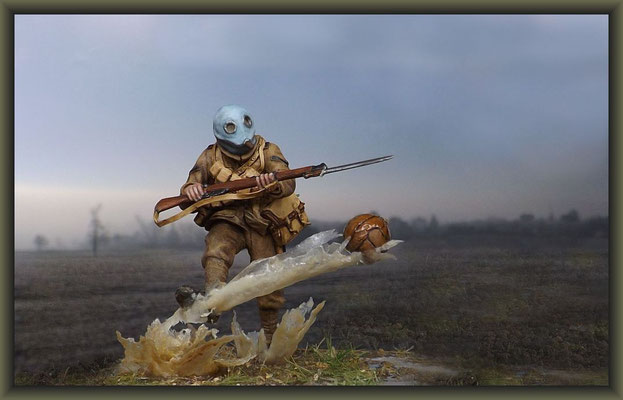 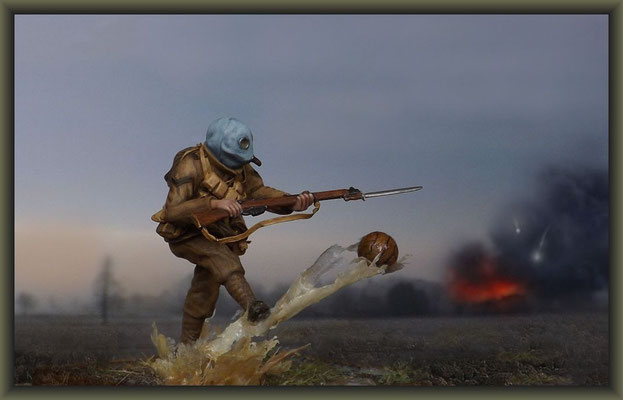 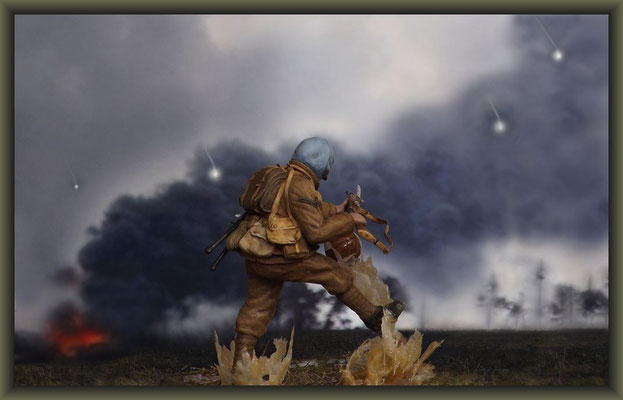 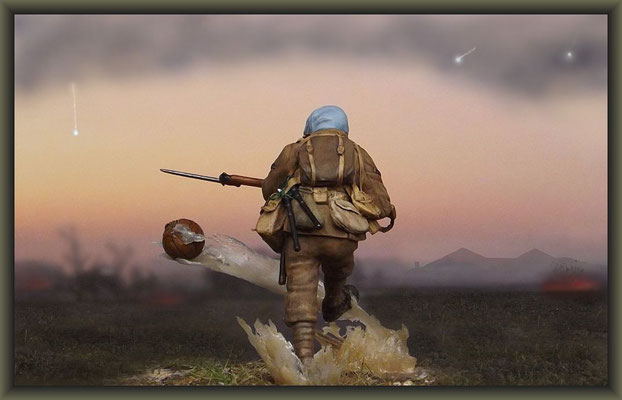 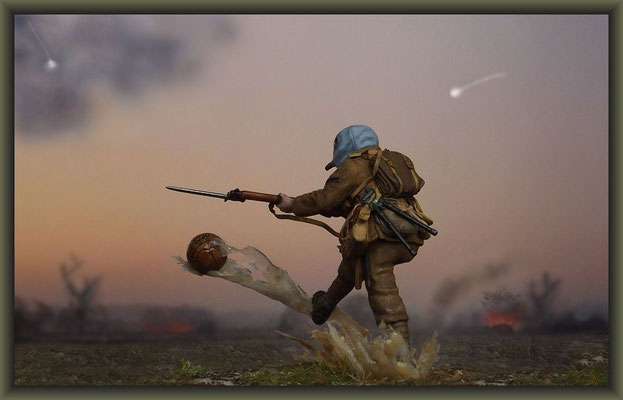 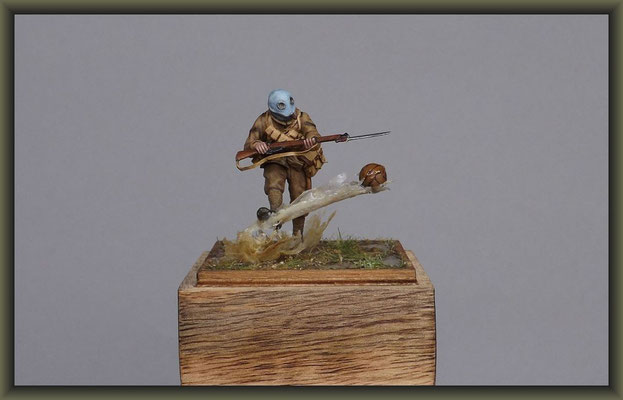 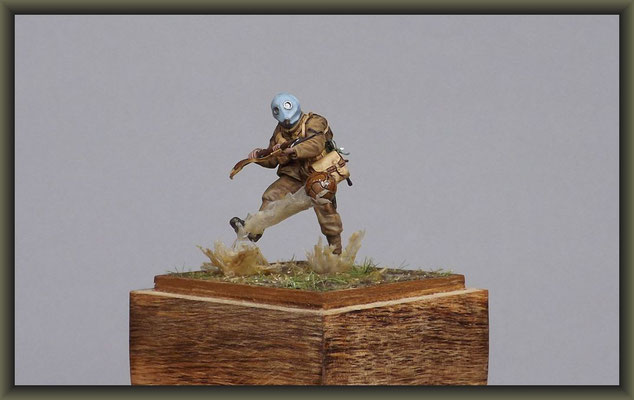 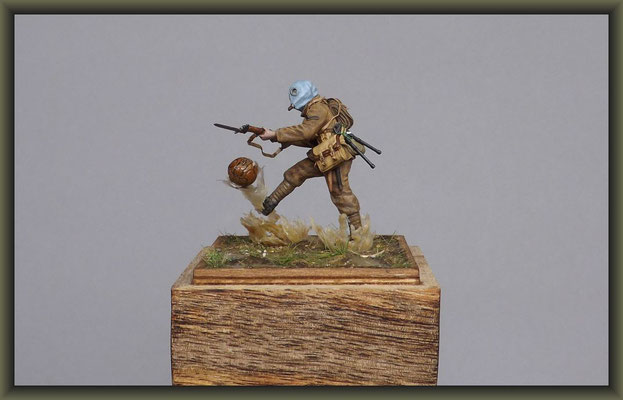 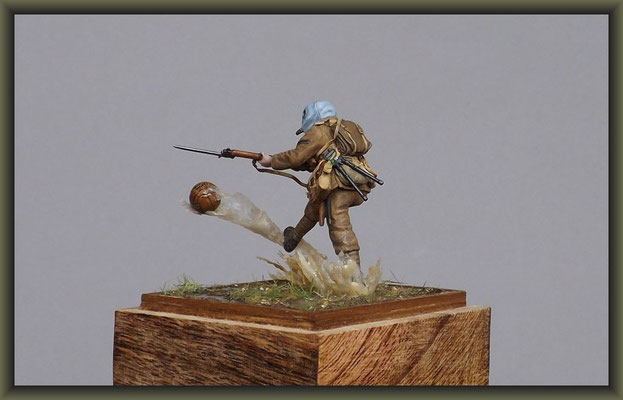 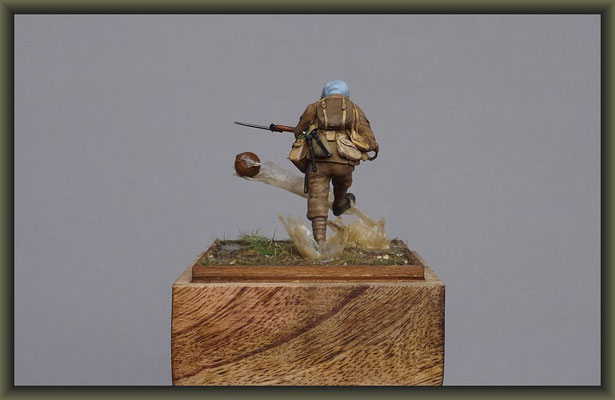 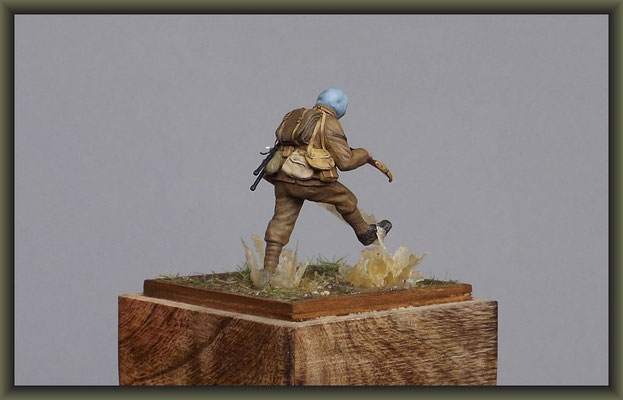 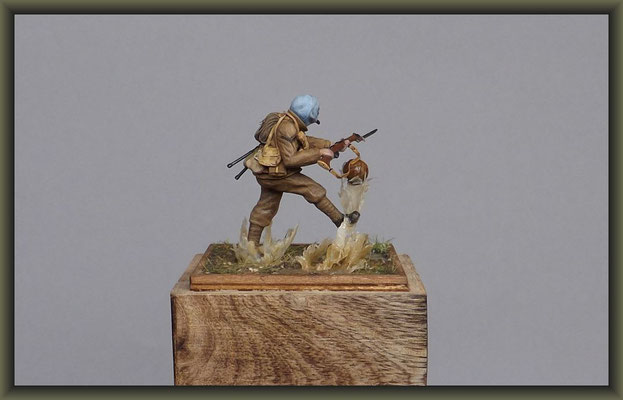 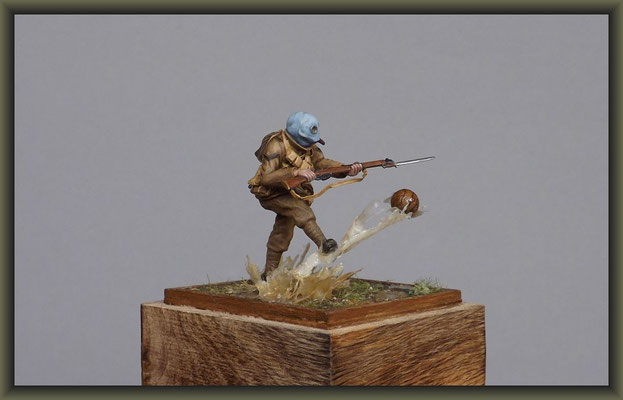 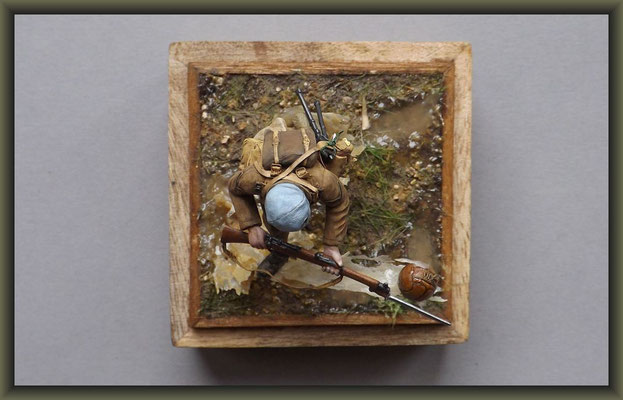 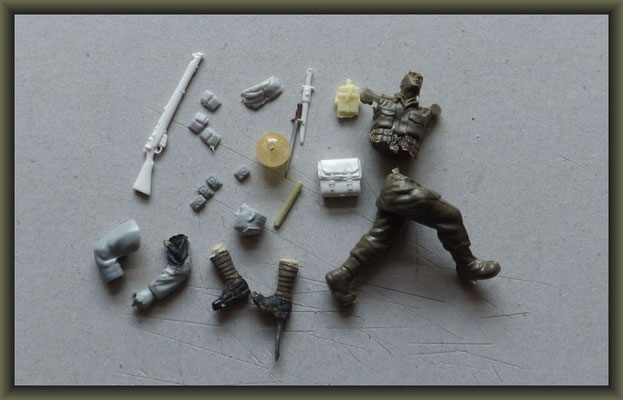 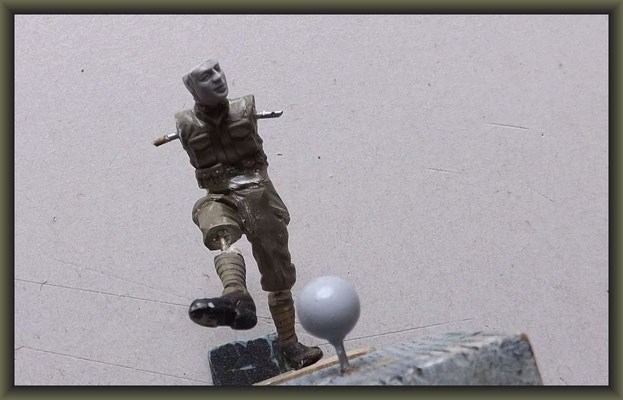 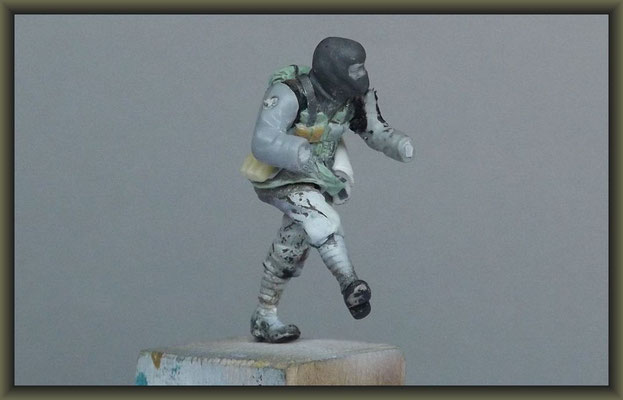 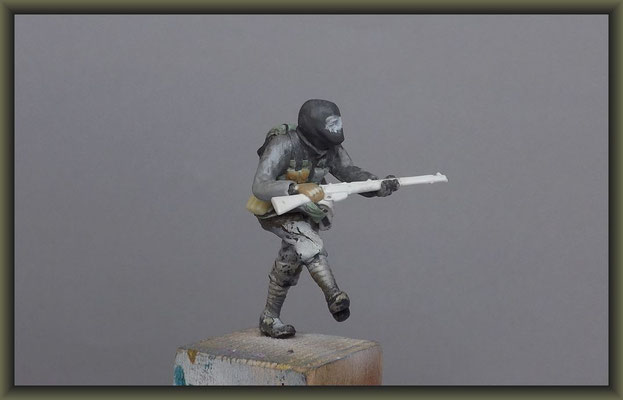 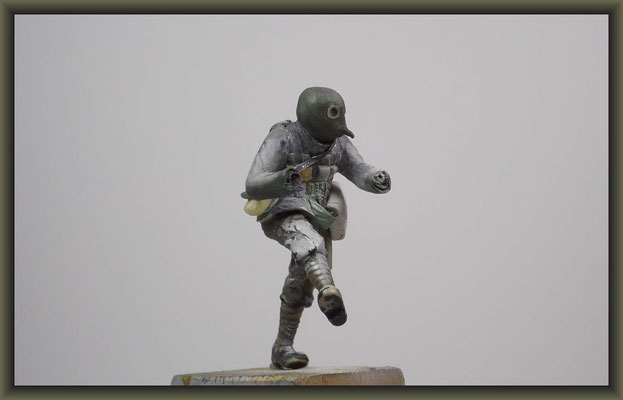 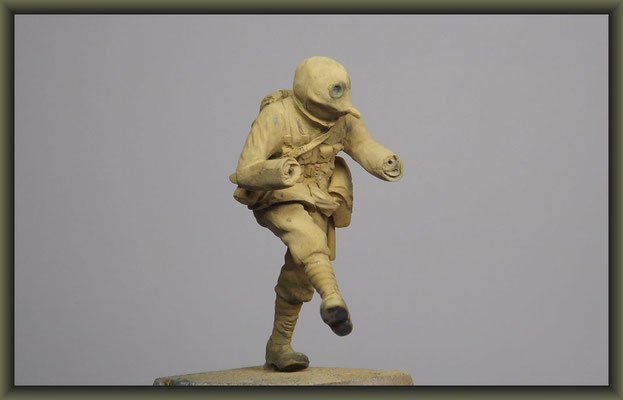 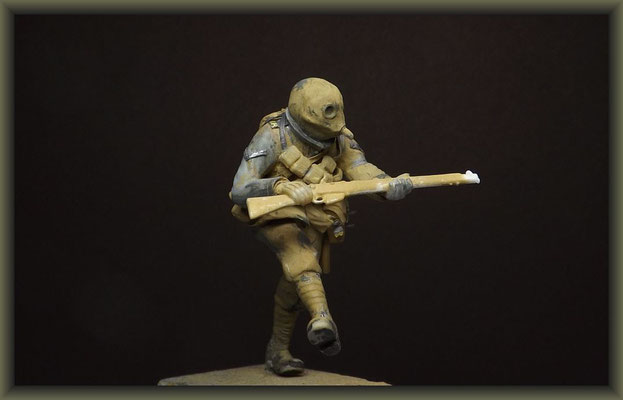 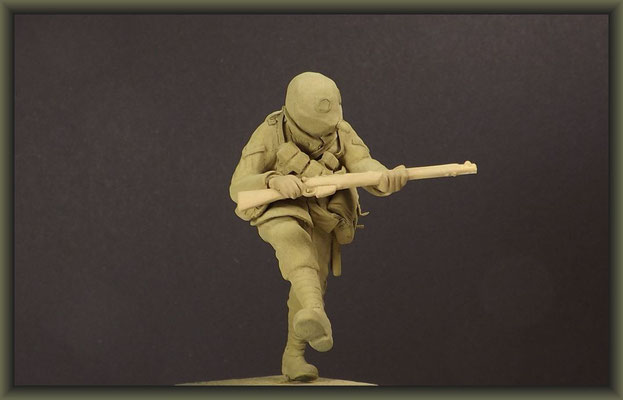 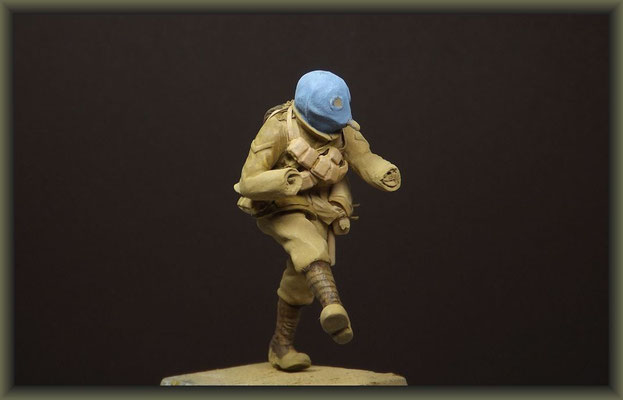 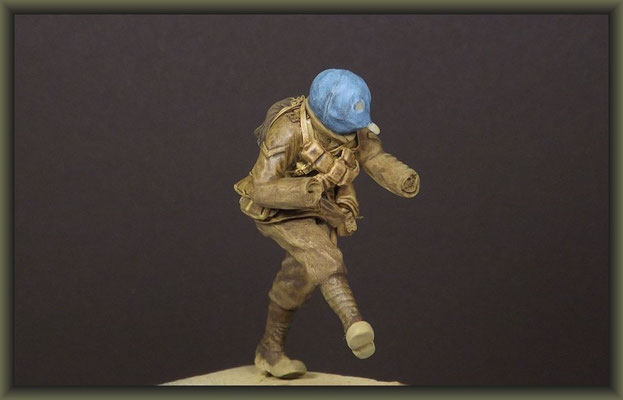 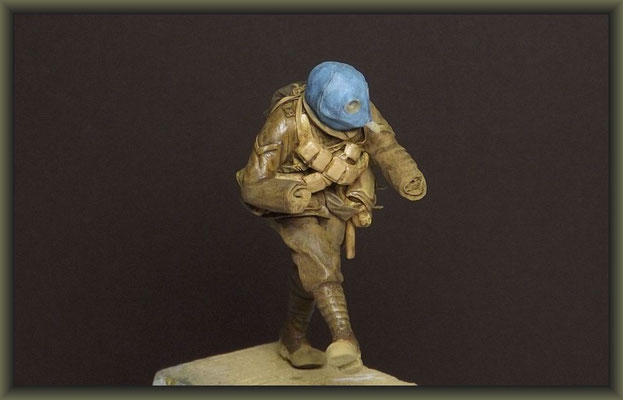 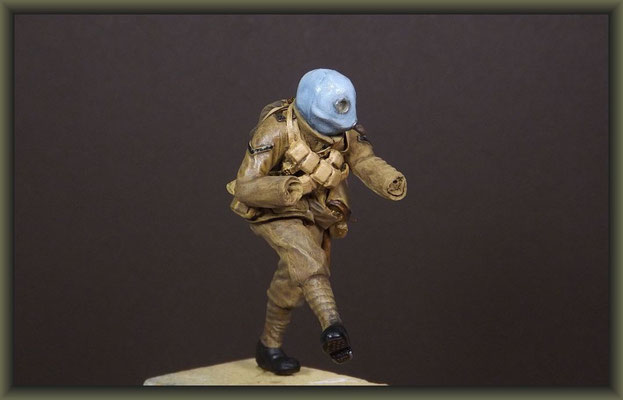 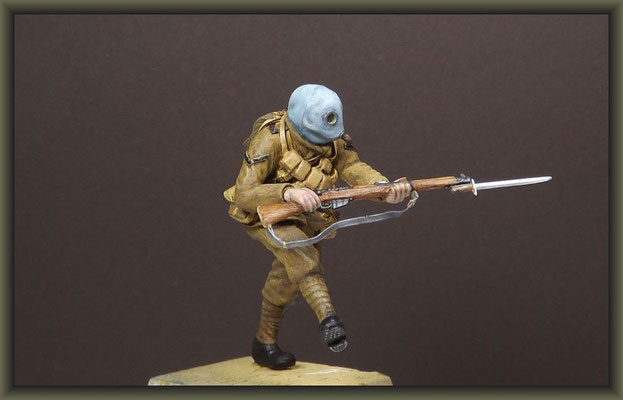