The Messines Ridge had been in the hands of the Imperial German Army since Nov'14 after the First Battle of Ypres. The ridgeline itself started some 4.5 kms south of the city near the town

of St Eloi, bulged out westwards around the towns of Wytschaete and Messines and ended some 15 kms later around St Ives.

The feature was heavily fortified and offered the Germans an exellent view of the allied lines.Sooner or later this position had to be taken - there was no way around it ... but there was a way under it.

Tunnelling work had began some 18 months earlier under the direction of Major John Norton Griffiths (R.E.). Twenty-one galleries were dug from concealed positions 2000 yds (1.8290m) from the German trenches, to a depth of some 100ft (30m) below them. The workload, from the felling of trees, the processing and transportation of timber, the digging of the tunnels, disposal of the soil, right up to the laying of the charges and the tamping of the gallaries, must have been immense.
For seventeen days the area was bombarded by artillery, then in the early hours of the

7th of June the barrage ceased. Then in the quiet light of a full moon the Bavarian infantry left their deep dugouts and expecting an attack - manned their trenches. At 0310 hrs the chambers, holding a million pounds (453.600kgs) of ammonal explosive between them, were detonated.
Of the 21 charges laid 19 went up, fired (by accident) in staccato from north to south.

non - nuclear explosions in the world. It has been stated that 10.000 Germans were killed in the blasts but I reckon that the count was more near 6000 ... still a horrendous number of souls.
General Plummer's 2nd Army duly surged forward (some being caught by falling debris) and captured Messines and Wytschaete. By the 14th of June the battle was over and the enemy line had been pushed back some 3 miles. 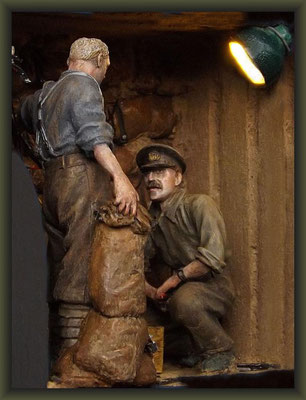 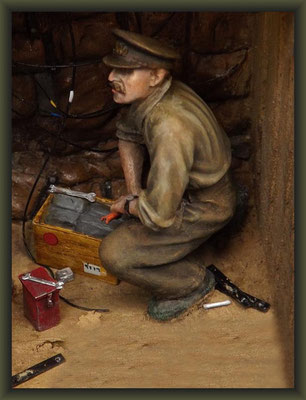 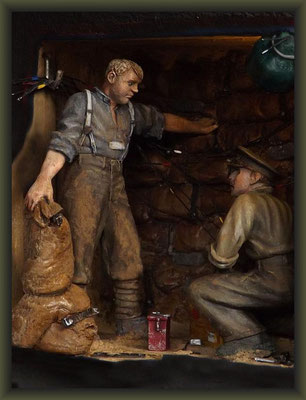 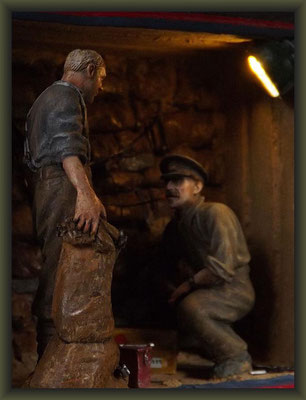 The vignette is not only my first non-360° but my first 'tunnel-job'. It's also the smallest project that I have ever built. For reference I consulted this renownd work:

Apart from the Ashwood box and my woodwork there's not be a lot on offer here but I think it's worth mentioning a few points.
The Officer and Sapper  are filling in a demolition chamber. These were much larger than the normal working tunnels or galleries. For comparison I've made a plywood mock-up to give you a feeling of the cramped conditions that the tunnellers had to dig and crawl through.

This small gallery, set at right angles to the demolition chamber,was then tamped with sandbags at intervals in order to direct the blast upwards.
The Ammonal itself was packed in rubber bags (sometimes in tin cans) and sealed with flat iron and bolts. To prime the charge the metal was removed, the detonator placed within and the bag tied at the neck. All detonator cords were colour marked to indicate their position. The bags in the wall seem smaller than those next to the Sapper but they are just folded into each other.
Gaps in the charge face were filled in with gun cotton (small gray slabs).
You may on close observation, be surprised that one figure is wearing house slippers and the other thick woolen socks. Tunnelling was a silent affair as sound transmits very easily underground. Countermining and camouflets were a constant danger as the 'competition' was also up to the same game. Albeit their hobnail boots proved to be a great give-away as to their whereabouts. 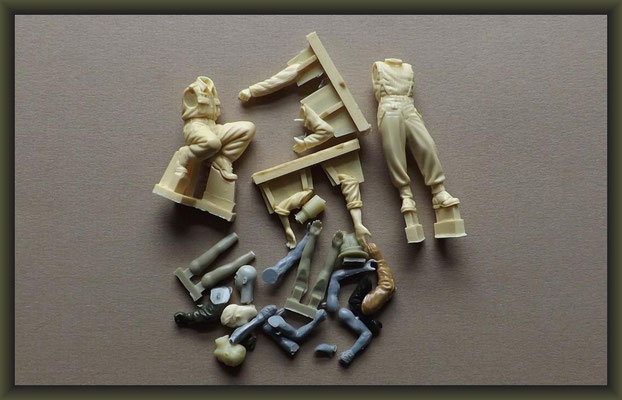 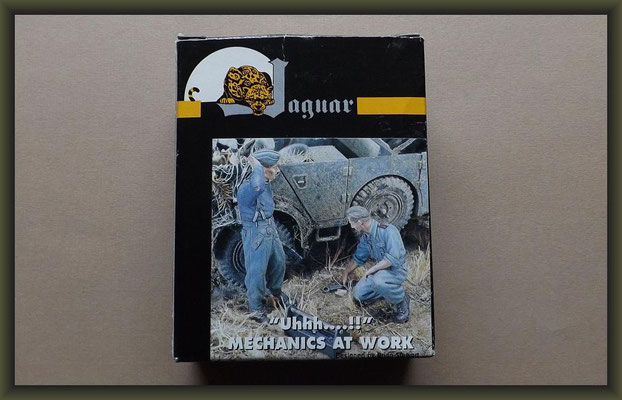 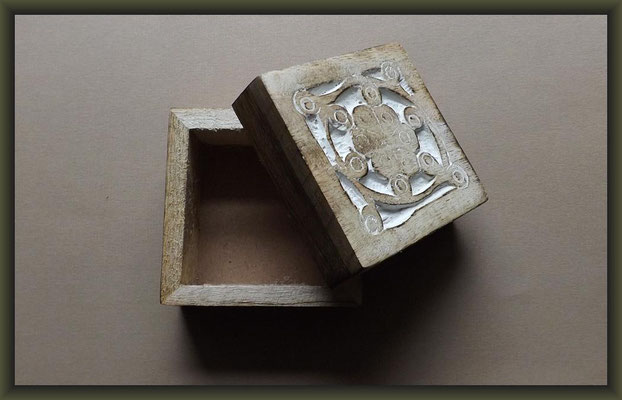 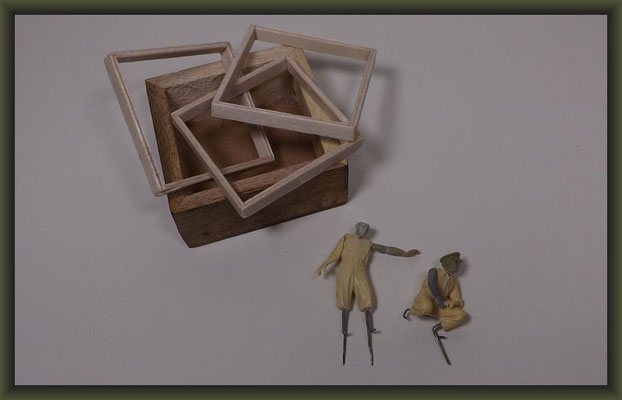 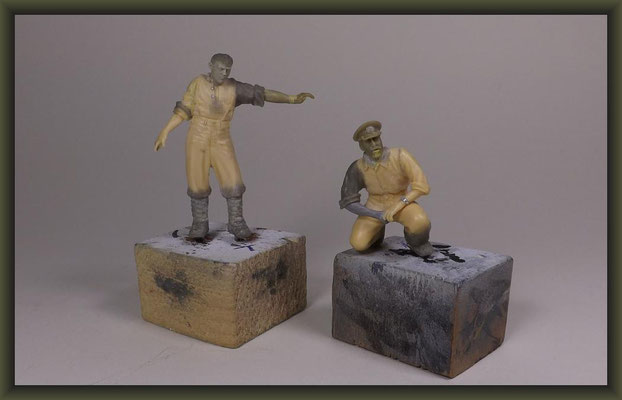 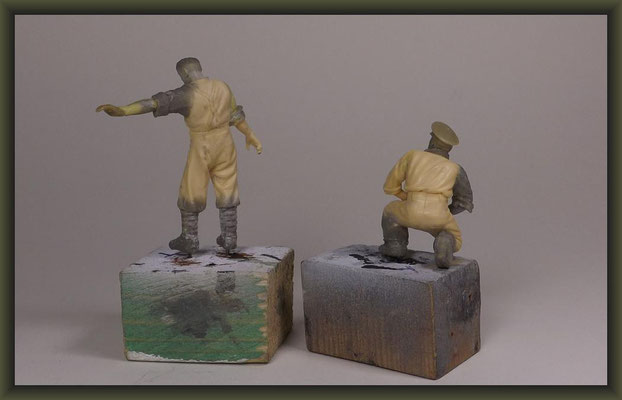 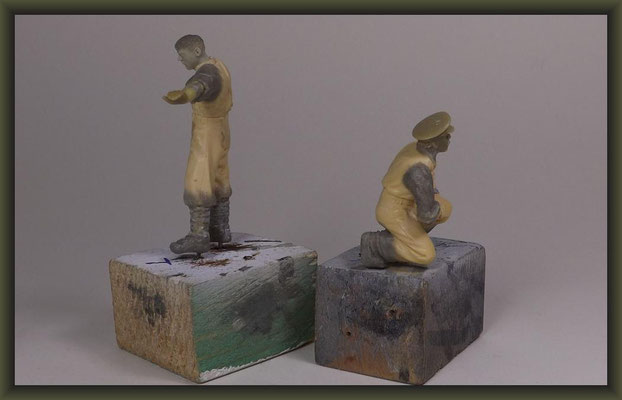 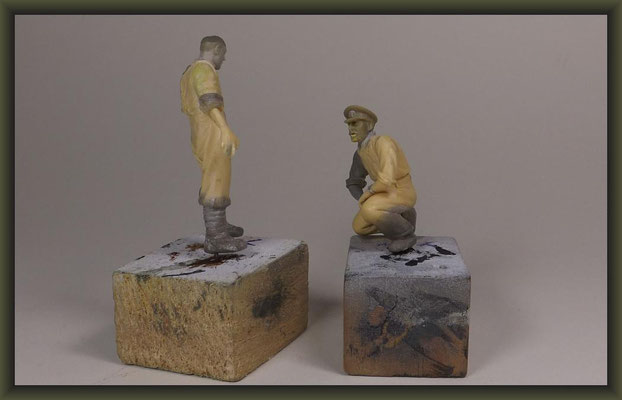 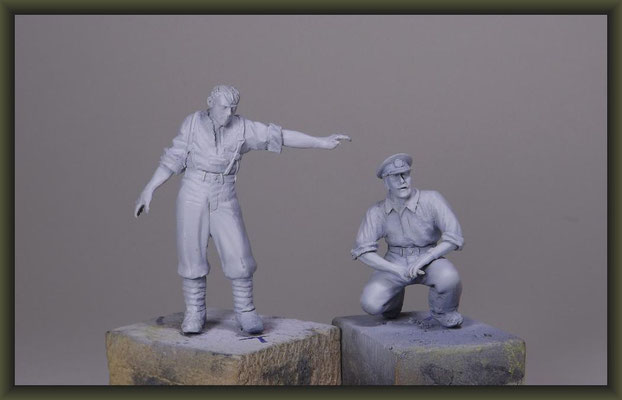 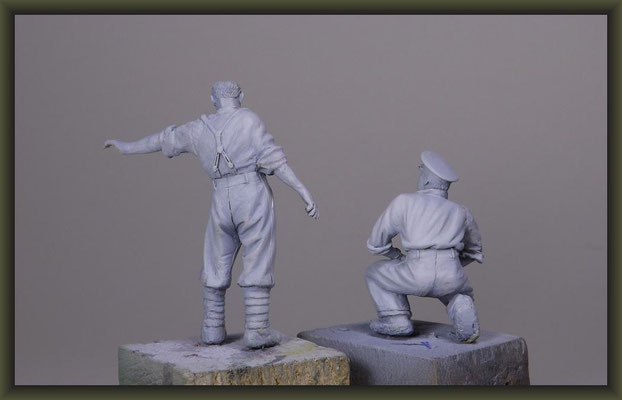 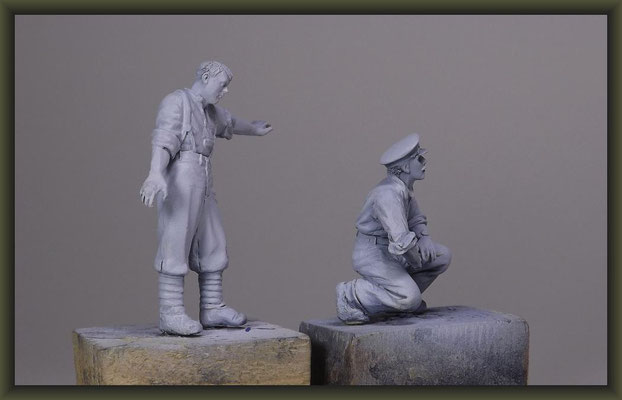 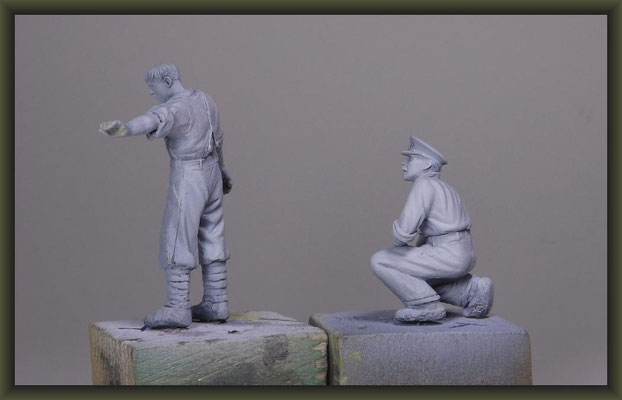 The 'Butcher's Bill' for the battle was around the same for both sides, ca, 24.000 with the Germans losing their vantage point, 154 guns and many M.G.'s and motars.
Some of these craters can still be seen today, their circles serving as memorials to the fallen of The Battle of the Messines Ridge.

Their masses are now filled with water ... from the tears of the weeping willows that embrace them.