Three years to the day - in 'commemoration' of the German invasion of Russia, the Soviets hit back ... on a massive scale.

Operation Bagration, initiated on the 22nd of June, resulted in the worst defeat suffered by German forces in WW2.

After five weeks of fighting, the victorious but exhausted Red Army stood before the gates of Warsaw. The German Heer had lost some 67 divisions, their Army Group Centre committed to history and they were more or less right back, were they started three years earlier.

I have given the old Tamiya T-34 a bit of a facelift ... internal detail, reset antenna, better engine screen, more appropriate wheels, a few individual track links , some external detail such as ...  turret pistol ports, weld seams etc and last but not least a scratch built hull ATO 41 flamegun in place of the standard Degtarev DT 7.62 mg.

The flamegun, incidentally,  could deliver 10 bursts up to a maximum range of 120 metres. The flame-fuel itself was a mixture of Kerosine (in the Zis tanker) and either oil or Mazut (heating oil) ... hence the empty red canisters.

The ZIS truck from ARK Models was built OOB but I have 'tarted it up' with a cam scheme and armoured fuel pipes. I have also turned it into a field modified version with rear side pannels and 'odds & sods' from the spares box.

No specific unit on this Dio ... I've just opted for only the most spartan of markings (as most of the Sov. vehicles were/are).

The date for this one is around the end of July, when the mighty operation was coming to an end.

The truck driver is a bit slow untangling the hosepipe and is being given a few words of 'kind encouragement' from a crewman. There have been losses, so it looks like the tank is about to get a new turret number.

As for the 'lush' up front ... well some people never have enough !!

Better let the tank commander alone to his 'refreshment' and finish his smoke in peace. Take it easy ... no point in worrying, lets hope those Kerosine fumes don't carry in their direction or 'Tanking-Up' could have a whole new meaning.

Wether you like this one or not, is up to you but for me it's one that I would not part with for the world. It not only turned out exactly as planned (which is quite rare for me) but seems to have it's own individual atmosphere, which was something that I was quite unprepaired for.

The Diorama title? Have a earfull of that old 'Dire Straits' song ... 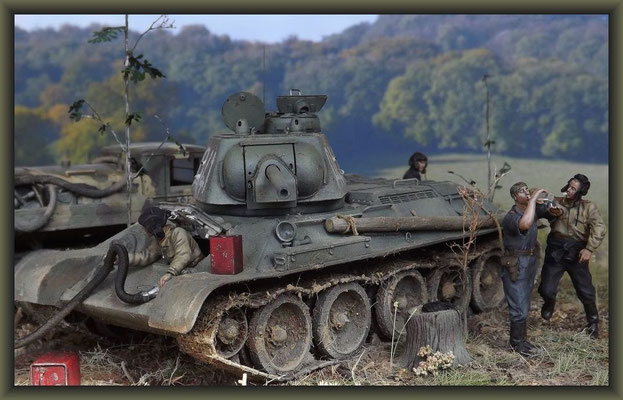 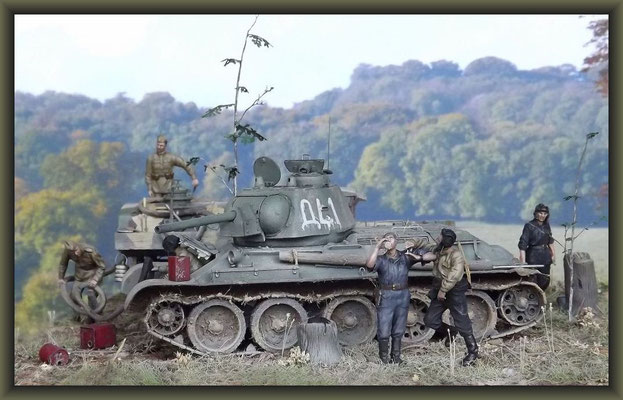 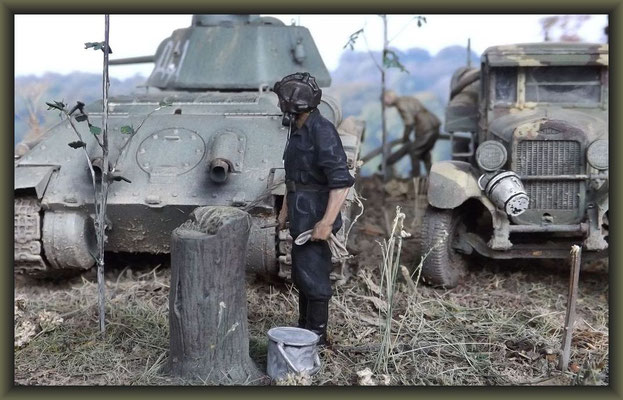 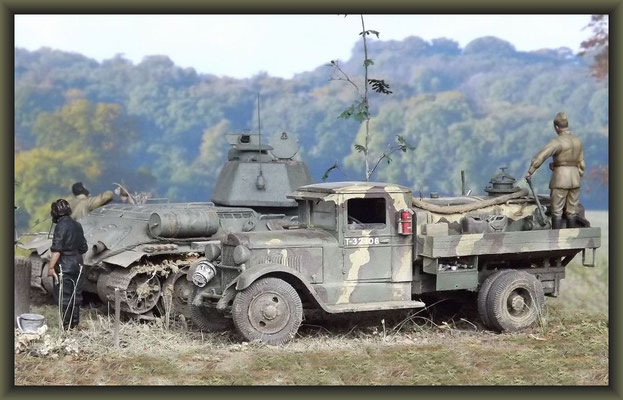 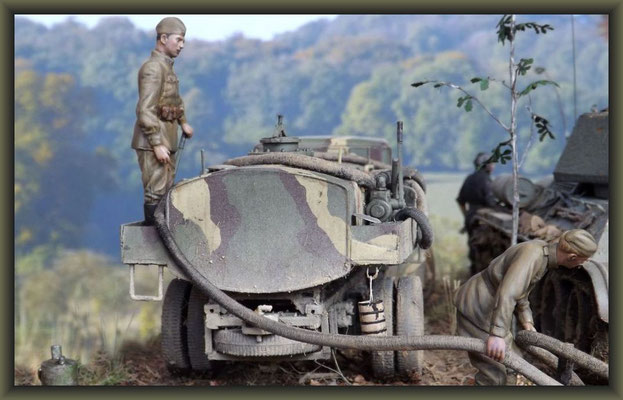 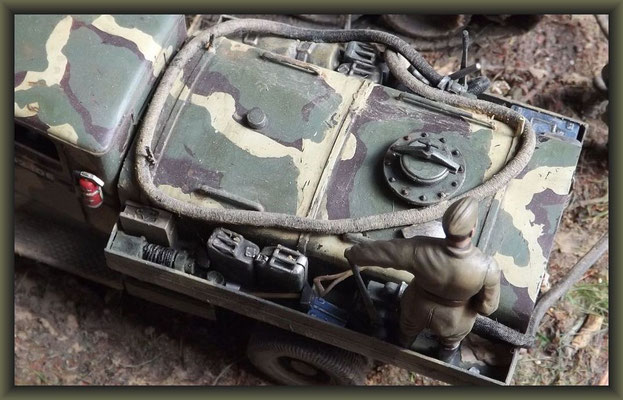 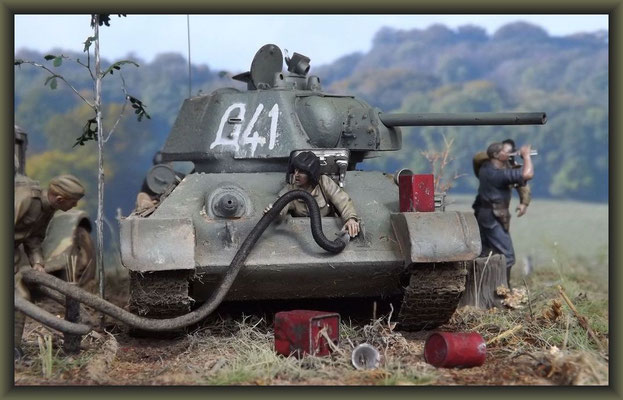 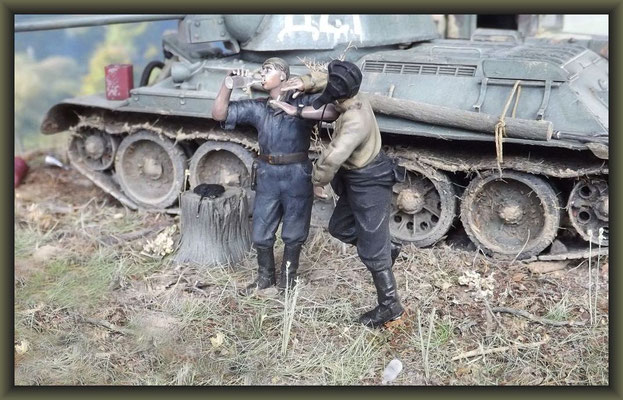 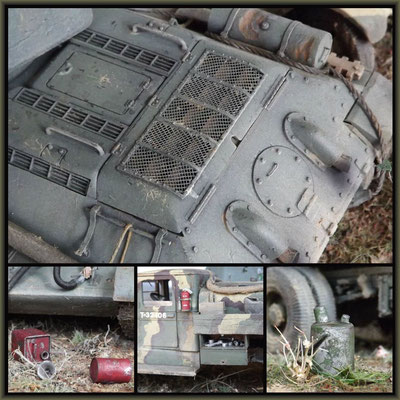 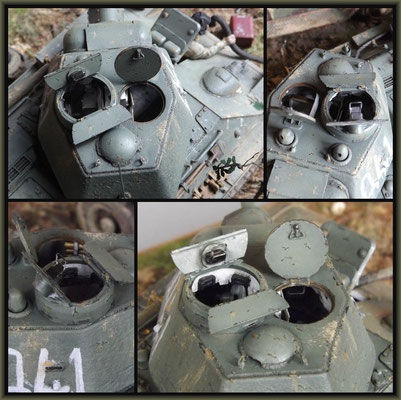 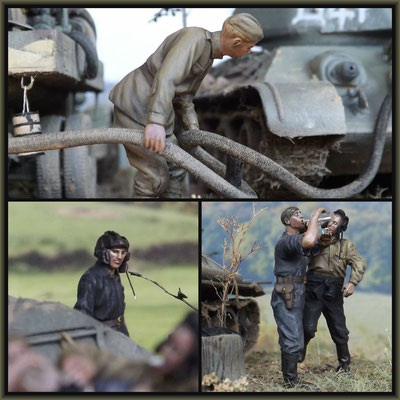 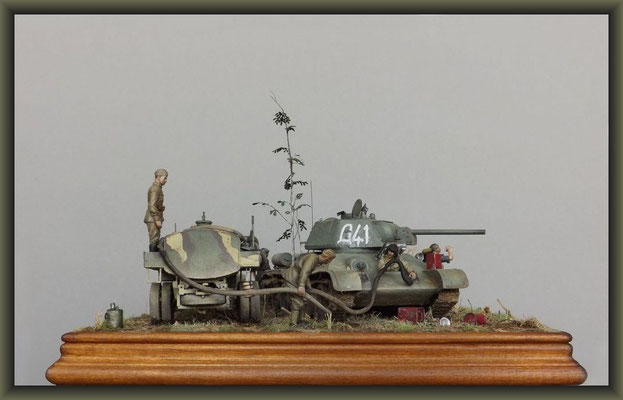 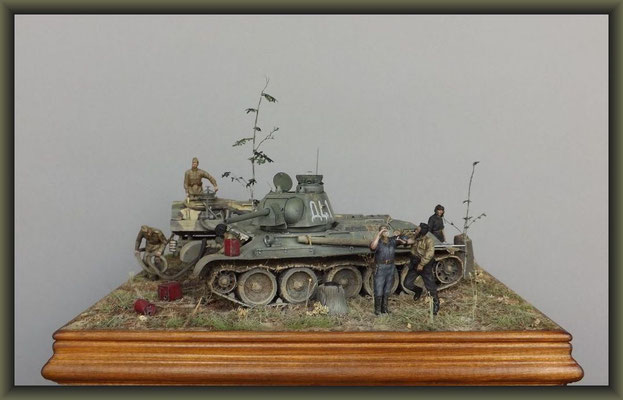 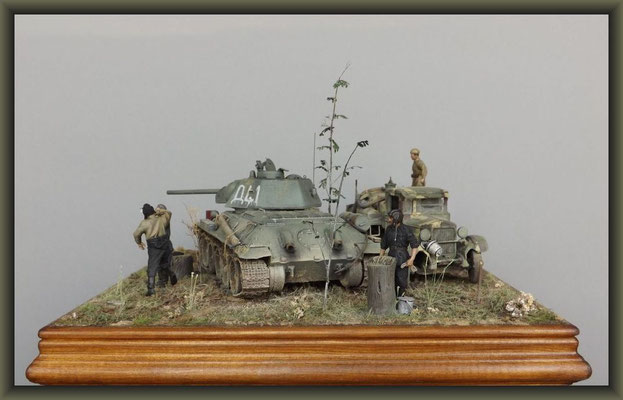 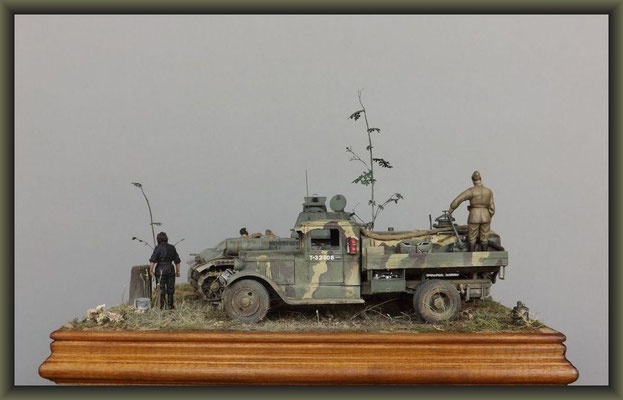 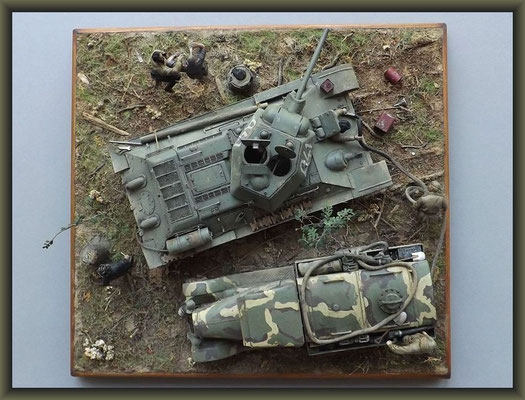 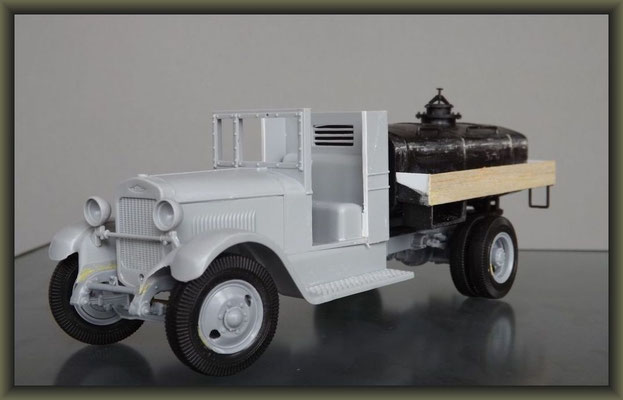 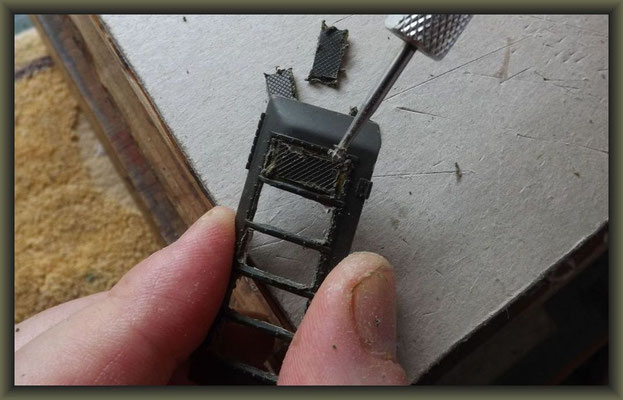 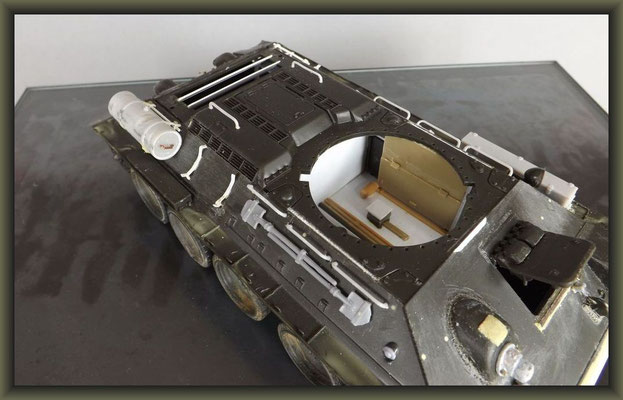 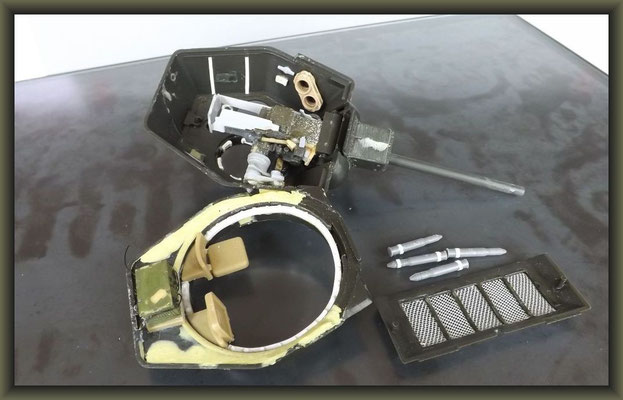 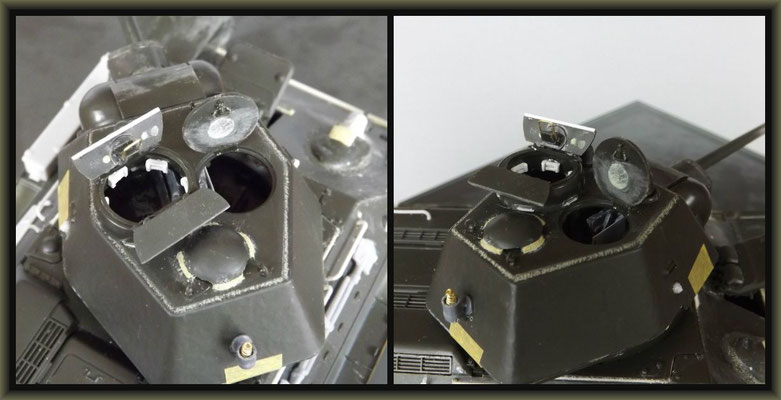 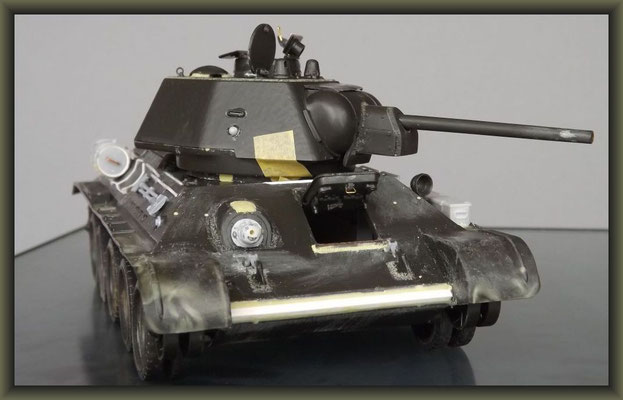 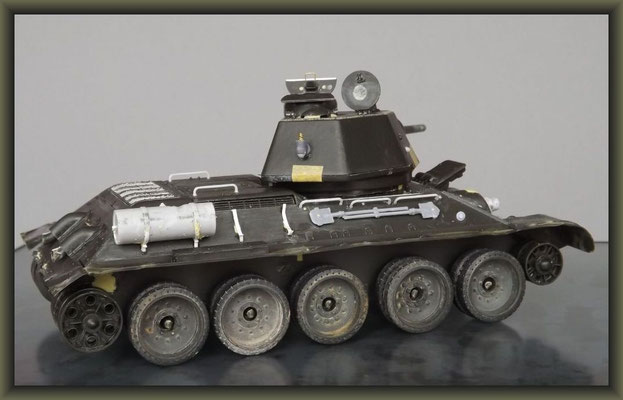 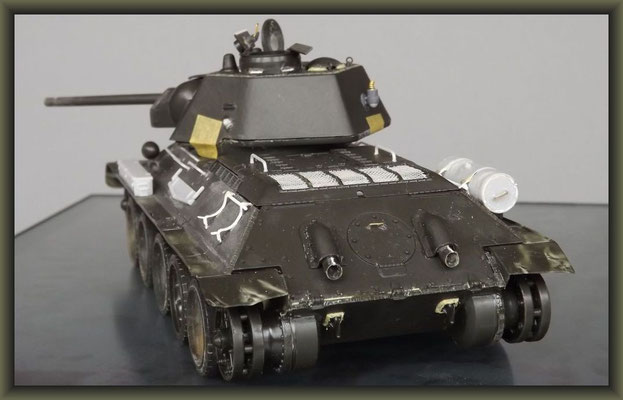 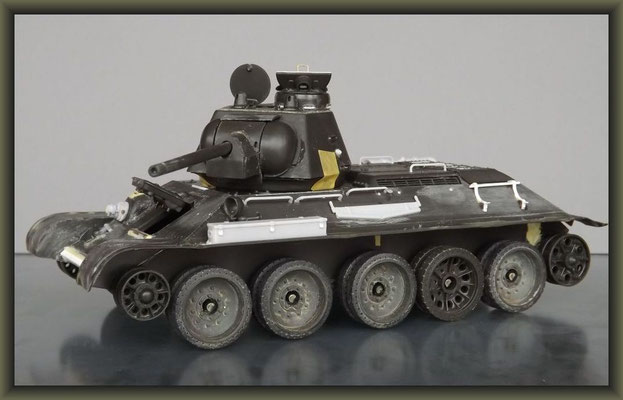 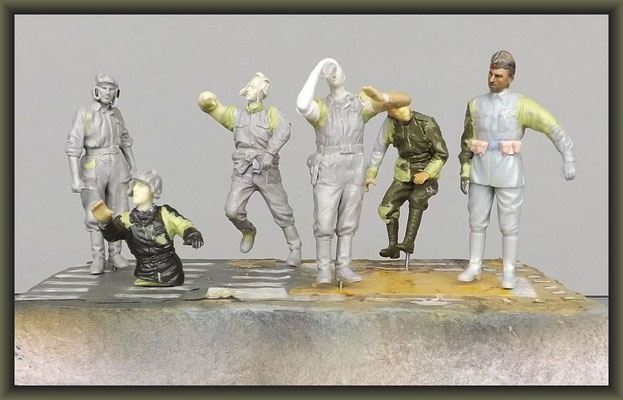 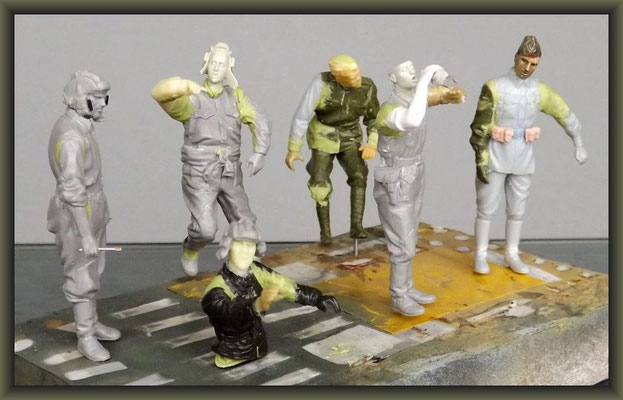