The first six months of the Pacific war saw the Imperial Japanese forces devour vast areas of territory. It seemed that they were not only insatiable but truly invincible.

This pallet of sucsess changed when they took on the Australians at Milne Bay. Two weeks of battle served up their first failiure in a major engagement.

The P-40's of the RAAF's 75 and 76 Squadrons (with some U.S. help) playing a vital role in not only sinking the enemy's landing barges and supply dumps but also shooting down a myrad of IJAF aircraft. An early learning curve for both sides … for one in victory, for the other in vanquishment.

For more info about this little known battle and the P-40 allow me to offer you a menu card:

As for the modern day Japanese stuff, I can say I'm quite a fan. No prejudice myside whatsoever. Like Tamiya kits, Hasegawa's P-40E is easy to build and well detailed (apart from the small nose panel). My problems arose when I turned it into an airborne version - a lot of work on the undercarriage and the canopy had to be fixed in position with steel pins as it kept springing off  (ho-hum).

Sharp eyes will notice, that I've reverted to using the kits earlier gunsight after coming across newer aircraft pics of 75 and 76 Sqn. Sorry about the confusion but in the event it seems that both types were in service around this time. My scratchbuild "effort" will keep for another job ...

As you can tell from the links, the conditions at Milne Bay was far from a tropical paradise, so I've pasted on some crud that has splashed up from the P.S.P. runway plating.

There is some confusion as to the markings of his craft at this time, so I've gone for a mix of these two (please scroll both of them down):

Ah well, all good things come to an end … they certainly did for the Japanese, when they bit off too much to swallow ... and tasted defeat at the Battle of Milne Bay. 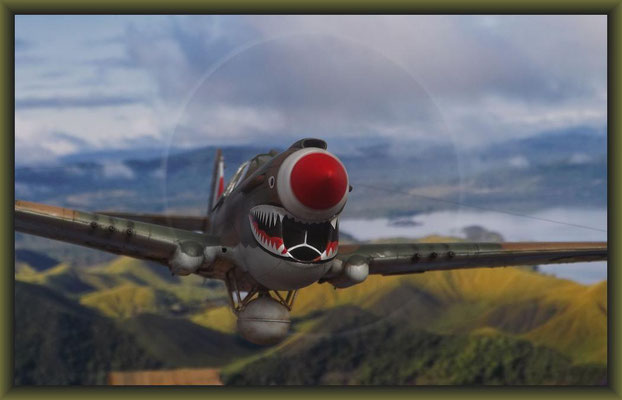 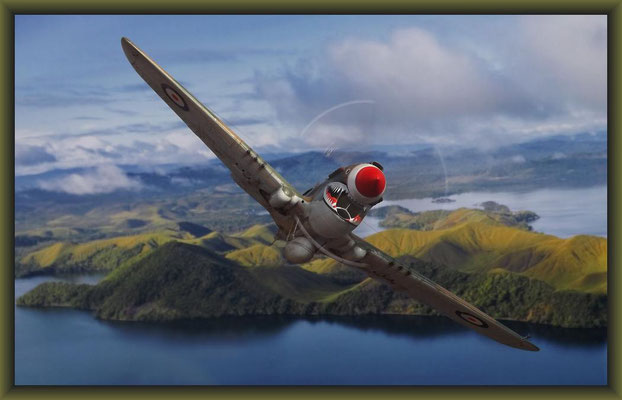 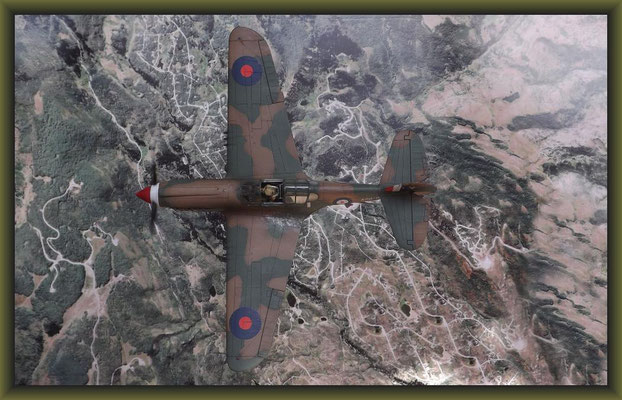 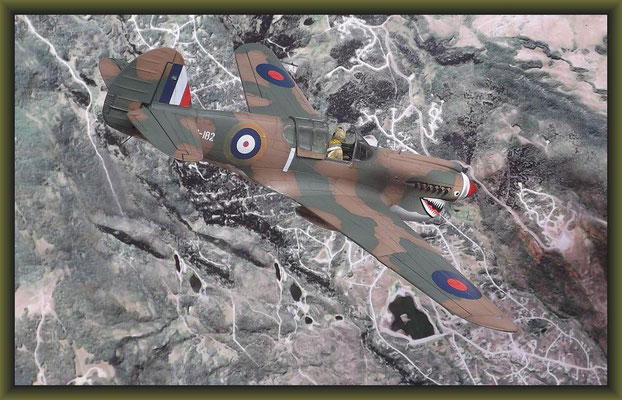 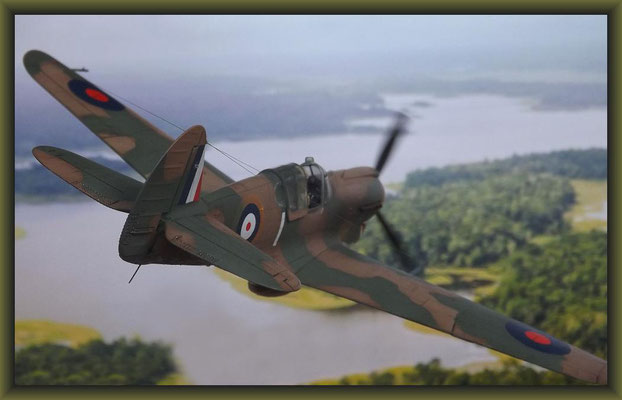 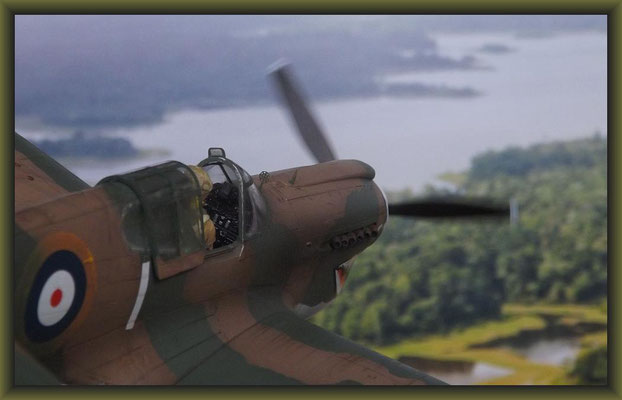 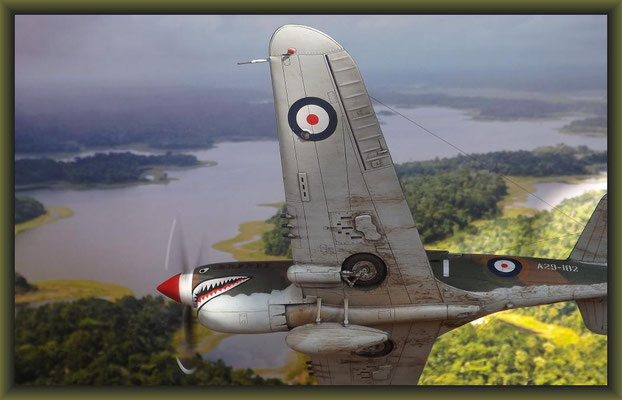 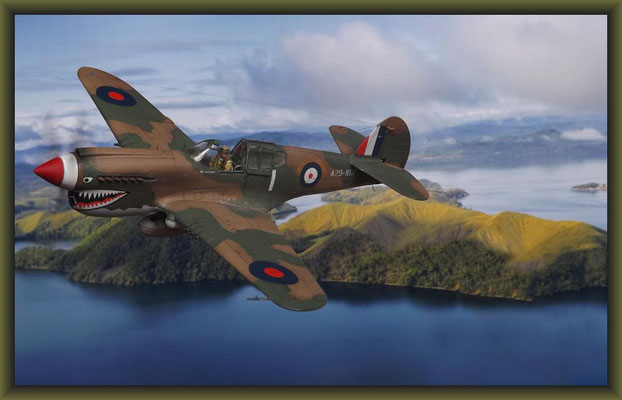 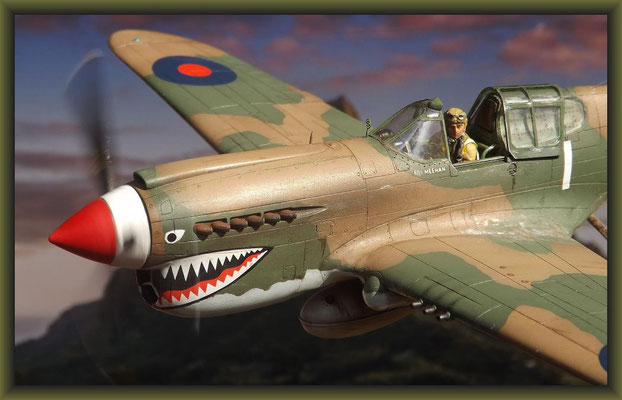 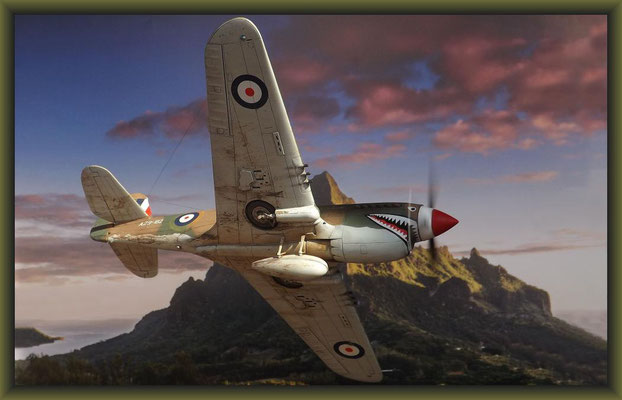 Taking to the skies with this:

… improved, backdated and transfered into an RAAF Kittyhawk.

First up, a scratch built N-2A (vertical) reflector gun sight. More apropriate to my version than the kits (in clear) horizontal version.

Onto the instrument panel. I've cut off the lower section as this operates the gun camera which I'm leaving off.

When I said "take to the skies" I meant it literally, as you can see by the closed wheel bays and free spinning propeller. Hasewaga's wheel wells are far too shallow, hence the halving of the tires.

The kit supplies the early round exhaust pipes instead of the more common "fish-tail" forms, which suits me fine. I've reduced the flash only slightly on these parts to represent weld seams.

If your wondering where the pilot came from, I've taken two from this box:

... and bashed their heads together.

Right then, let's get this thing together ... Interior Green on main parts:

Main components cemented together. Profi aircraft modellers prefer to glue the rear tail and top housing to the fuselage first to get a smoother fit, I decided not to as the area has to be kitted and re-scribed anyway. 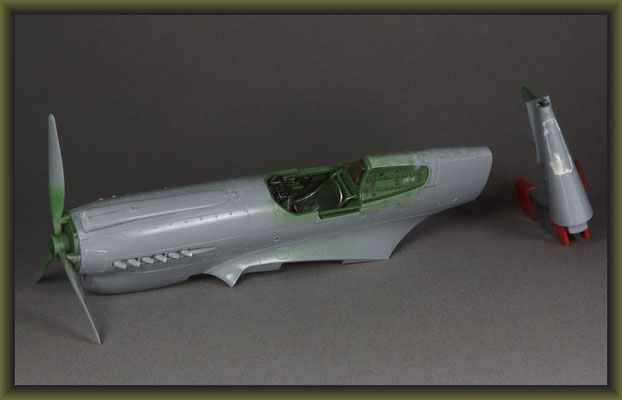 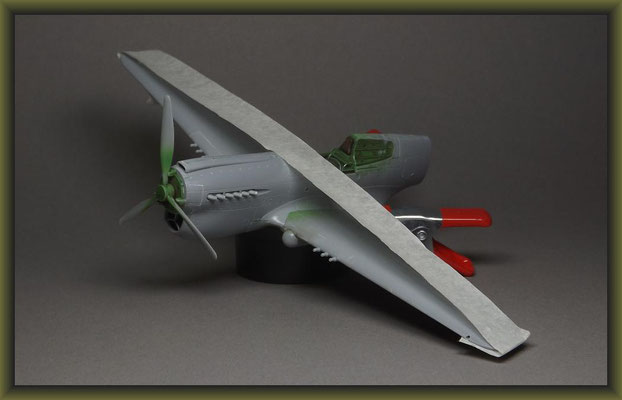 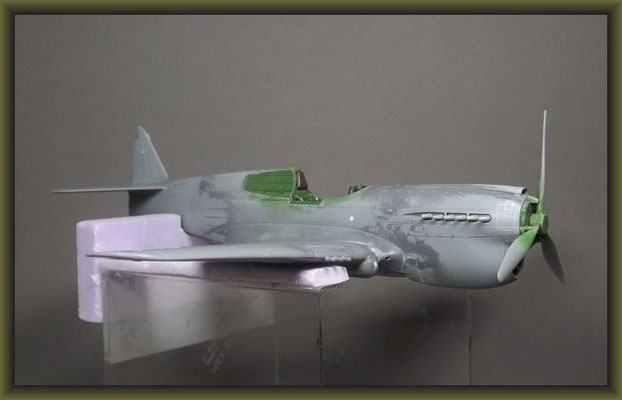 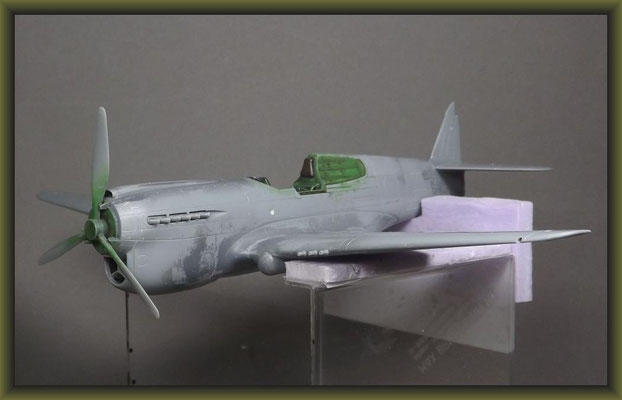 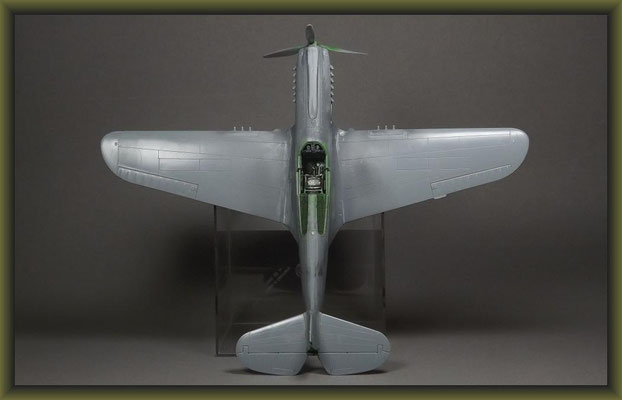 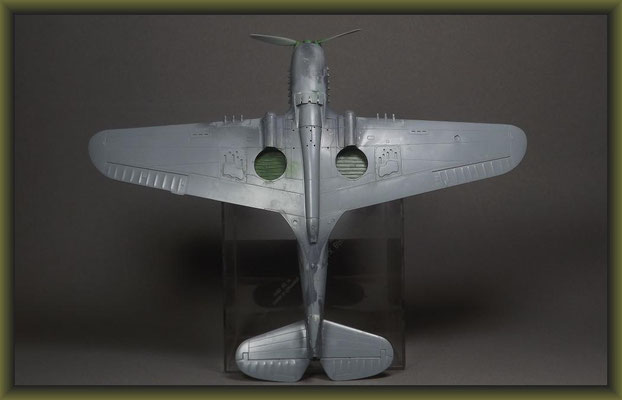 Hasewaga thought ahead on this model, hence the seperate rear section. Probably to use it as a basic frame for later (F and upward) longer tail versions. Allthough why they didn't do the same as regards the ever changing forms on the air intakes is a puzzle. 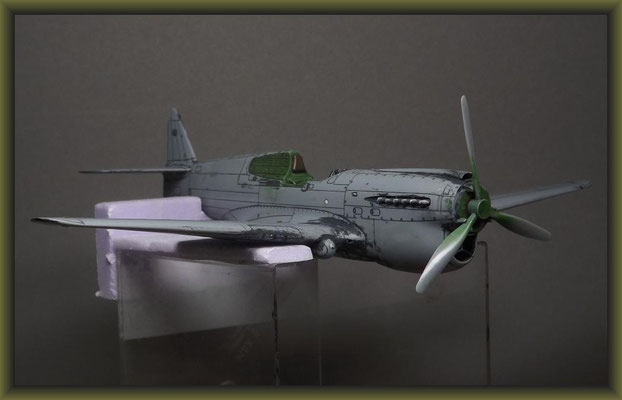 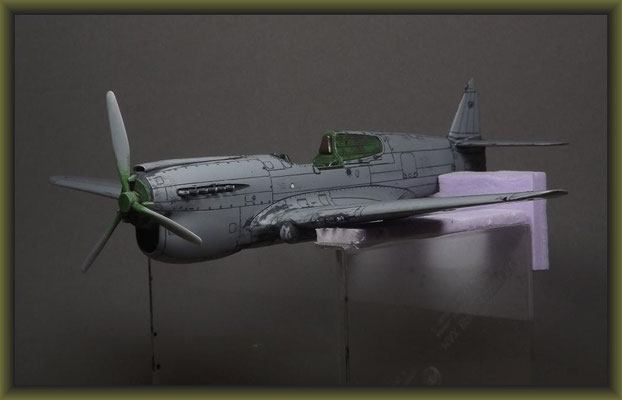 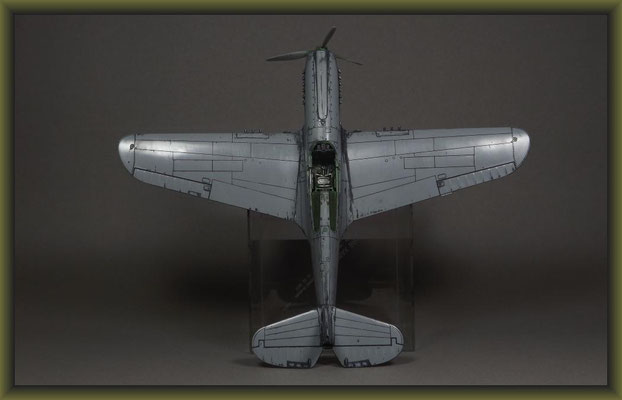 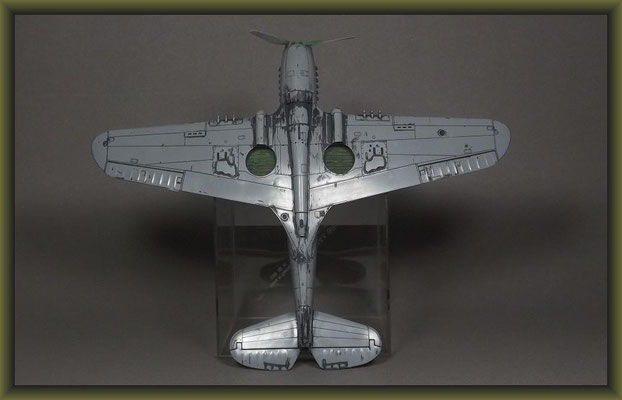 I'll freely admit to being no expert on the P-40 or any other aircraft for that matter, but I did notice that the sieve-like plate just ahead of the exhaust manifold is only to be found on later M/N P-40's. Area filled and panel lines rescribed accordingly.

Yes -Yes, I will get it cleaned up … still with such a drawing board mistake, I guess I'm not the only "flying cowboy" in town.

As for the airbrushing, what I'm aiming for is the Dupont paint colours. Confusingly this brand can have within itself different tones depending on U.S. or R.A.F. batches. One can be a light brick red the other an olive drab. Generally though, it seems to me that it has a russian green as a low tone with a high of medium green. The brown is a bit more tricky as it is of light tone that 'bleaches' to sand with just a hint of crimson.

This being tough enough, I decided to forgo the "obligatory" black pre-shading in case of darkening the thing too much. I thought I'd try out a lighter pre-"cam" instead.

Of course you can buy the exact paint colour, but after further surface treatment the tone would turn out to be far darker anyway. I always mix my own paints and test them with my own required washing etc beforehand. This way I have more say as to the shades that I want - when and where I want them.

Lastly, the appropriately named Tally-Ho decals. I was just about to place them on some paper after ten seconds in H2O ...

… and they galloped away over yonder hill. Looks like I'll just have to scan the horizon for new transfers.

I dunno when I'll be finished with this one … I guess we'll just have to keep an eye on the water.